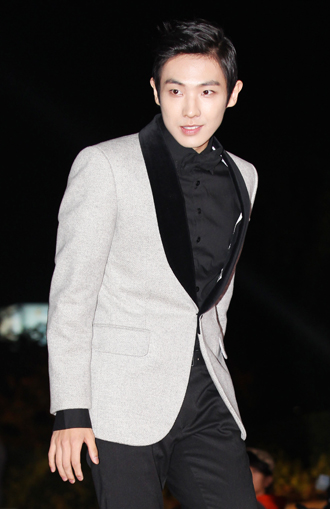 The award ceremony was launched this year to boost Korea’s independent film industry amid the ever-rising dominance of the multiplex movie theater system.

Lee won the award for his part in the 2013 film “Rough Play,” where he starred as a fallen movie star who struggles to find his way back to the top. His performance in the film won wide acclaim, largely differing from his counterparts in idol groups, many of whom are criticized for tinkering with acting as a way to widen their fan base.

The film was produced by Korean arthouse filmmaker Kim Ki-duk, who won the Golden Lion award at the 69th Venice International Film Festival for his 2012 film “Pieta.”

“I am so honored to receive this award. Thank you everyone. I truly appreciate it,” Lee Joon told media during the ceremony.

This season, Lee Joon will expand his career further in the tvN thriller drama “Gapdong.”

Aside from Lee, many other prominent film figures were also recognized in the awards ceremony. Jung Eun-chae won the best actress award for “Nobody’s Daughter Haewon” (2012), and the best actor award went to Nam Yeon-woo of “Fatal” (2012).

The best picture award was granted to “Jiseul,” which portrayed the “forgotten massacres” on Jeju Island in the late 1940s.