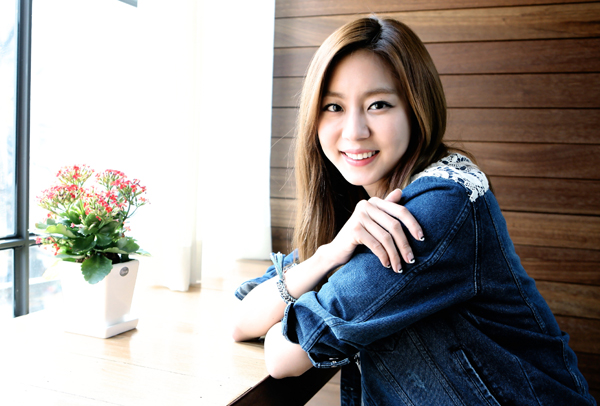 Singer and actor Kim Yu-jin, better known by her stage name U-ie from the K-pop girl group Afterschool, said she plans to concentrate on her acting career once she “graduates” from her group.

“I feel that I don’t have too much time left,” said U-ie in an interview with Ilgan Sports, an affiliate of the Korea JoongAng Daily, in central Seoul on Tuesday.

“In the past, I had more passion for singing and dancing. The notion of performing on the stage just thrilled me. But I’ve changed over the past few years; I want to focus on acting and learn properly.”

In April 2009, U-ie joined Afterschool as its youngest member for the group’s second mini-album, “Diva.” As time passed, several members have come and gone from the group, and it has fluctuated between five and eight members.

Since the 34-year-old leader Park Ka-hi left the group in 2012, U-ie is now one of the veteran members, along with the original members, Kim Jung-ah and Lee Joo-yeon.

U-ie made her acting debut on the MBC historical drama “The Great Queen Seondeok” (2009), playing the younger version of Ko Hyun-jung’s character Mi-sil.