Neglecting your basic duty is a sin

Neglecting your basic duty is a sin 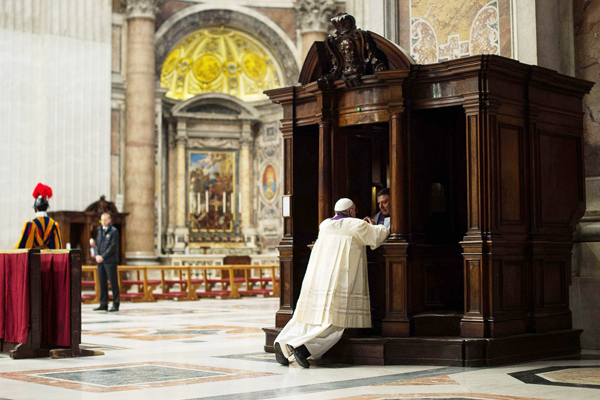 Pope Francis knelt before a priest and confessed his sins. I stared at that photograph for a long time. My brother was a priest and I confessed my sins before him a few years ago at home.

My brother held a family service on the anniversary of my mother’s passing, and I had not gone to confession in advance.

As my brother gave his homily, I thought that I would never confess my sins to him again. So I made sure I went to confession before the memorial. And after my brother passed away two years ago, I grew lazy. The pope emphasized that it is the duty of believers to repent and confess their sins, demonstrating the most basic responsibility we have to fulfill, which I had forgotten.

The media called the pope’s confession “unprecedented.” No pope has been seen kneeling before a priest. However, every Catholic needs to go to confession before a priest - that is a traditional act that cannot be broken. But perhaps we have come to assume that those who are in high positions can be exempt from the most basic responsibilities.

When I interviewed a police officer for a story, he asked, “Does an editorial writer collect his or her own stories?” All journalists need to collect stories. How else can we verify facts if we don’t gather the news ourselves? But I have often met readers who assume that the media was creating news stories without really gathering news material. Or that some reporters don’t actually go through the proper channels to gather stories. Distrust of the media originates from distrust of basic duty.

The distrust in our legal system has been triggered by the latest controversy over the value of prison labor - 500 million won ($472,634) for a day’s work for the chairman of a now-defunct conglomerate - also can translate into general distrust. A trial is supposed to punish wrongs to maintain social order and mend social discord, and it can achieve that goal only when all members of society are convinced by the judge’s decision. The basic duty of the judge is to go through the ramifications of the case step by step to maintain “impartiality.”

But this recent case clearly illustrates that this very trust has been compromised. The head judges council held a meeting and proposed a revision on the prison labor system and the way it hands out fines. However, it seems that these judges are still bound by the confines of the old legal system and are no longer aware of what their true duty is.

Can the trust in our justice system be restored?

The photograph of Pope Francis kneeling before a priest and confessing his sins makes me realize that not fulfilling one’s basic duty is a serious sin - for anyone, no matter your status.