Chung’s series of slipups has many questioning his campaign

Chung’s series of slipups has many questioning his campaign 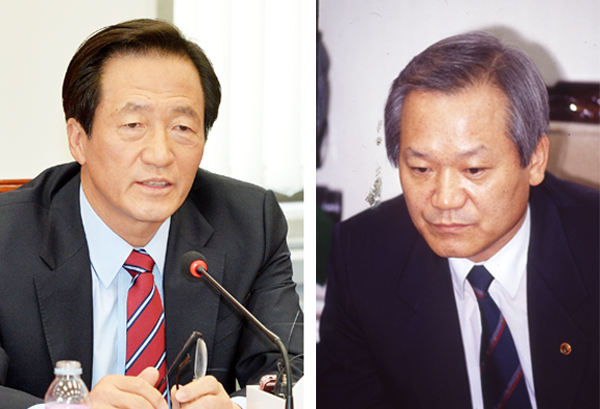 Questions over the way seven-term lawmaker Chung Mong-joon is handling his campaign to win the Saenuri nomination for the Seoul mayoral election arose yesterday after he made a series of embarrassing blunders the day before in declaring his appointments for his campaign staff.

The mishaps apparently confused both his supporters and as well as the very person he mistakenly announced had accepted his offer to lead his election team.

The confusion started at 2 p.m. on Wednesday, when Chung’s camp announced that Choe Byung-yul, the former chairman of the Grand National Party, which preceded the current Saenuri Party, accepted Chung’s offer to lead his campaign team as a solo director.

But at 9 p.m. the same day, Chung retracted his initial announcement, stating that the retired politician would serve as an adviser to his team.

The 76-year-old Choe, however, immediately denied he had accepted any role in helping the Assembly’s richest lawmaker win in the primary to face off against incumbent Mayor Park Won-soon of the New Politics Alliance for Democracy.

“I am sick of politics now. I don’t want any part in it,” the former four-term lawmaker said yesterday in a telephone interview with the JoongAng Ilbo.

The missteps fueled speculation that Chung’s unilateral leadership style has led to these embarrassing outcomes for his campaign team. Some political observers suspect that Choe changed his mind because of the pressure levied upon him to stay away from the former presidential hopeful’s campaign.

Choe is known as one of a handful of long-time confidants of President Park Geun-hye. Casting him to run on a campaign team would have boosted Chung’s chances of beating his rival Kim Hwang-sik in the primary by appealing to Park’s voters.

It is also thought that Chung rushed to prematurely announce Choe’s appointment even before obtaining his OK. Chung attempted to contain the damage done to his campaign yesterday.

“Choe had thought about and considered joining the camp,” Chung said yesterday when asked about the episode by reporters during his visit to a middle school in Yeongdeungpo District, western Seoul. He also expressed his regret over the confusion.

“But anyway, Choe told me that he supports me [outside of political sphere],” Chung added.

The mayoral hopeful and his rival Kim have tried to build their image as candidates supported by President Park since the beginning of the primary race.

Kim first sparked speculation that he was favored by the president to run in the mayoral election after he stated that he had talked via telephone to the presidential chief of staff, Kim Ki-choon, who apparently encouraged him to do well in the race.