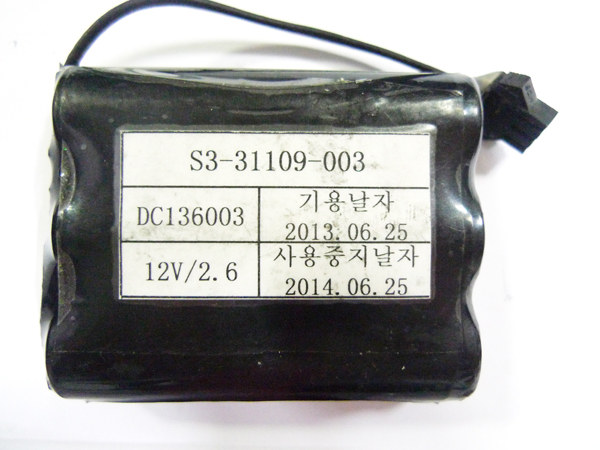 North Korean-style Korean words were written on the surface of a lithium-ion battery, which was separated from the drone found in Paju.[NEWSIS]

The unmanned aerial vehicle found south of the demilitarized zone in the city of Paju last month had fingerprints of people who are not in South Korea’s records, Seoul said yesterday.

“We found some fingerprints that are not those of our nationals,” said Kim Min-seok, spokesman for the South Korean Defense Ministry, at a briefing. “We assume they belong to foreigners or North Koreans.”

He also said the drone had used its parachute several times previously.

“It appears to have carried out multiple flights given the fact that its parachute was folded several times,” Kim said.

While the Blue House has tentatively concluded that the drone came from North Korea, Kim said the assumption has to be confirmed through a joint investigation with the police. If it is, he said, the government will “take action of some sort through international organizations.”

The exact number of photos snapped by the drone in South Korea before it crashed is 193, Kim said. Asked about the resolution of the photos, Kim said they appear to have been taken “from a very long distance.”

He denied local reports that the unmanned aerial vehicle, or UAV, was equipped to transmit photos to Pyongyang.

“Through our analysis, we found a 0.9 gigahertz transmitter used to receive GPS signals or control the drone, not to transmit video or images,” he said. “The digital camera had no cables connected to any other transmitters. So it could take pictures, but it was unable to send them.”

The UAV that crashed in Paju was discovered March 24. Another drone equipped with a digital camera was discovered on Baengnyeong Island in the Yellow Sea Monday, the same day the two Koreas exchanged artillery fire across their disputed maritime border.

When North Korea carried out live-fire exercises near the Northern Limit Line on Monday between 12:15 p.m. and 3:30 p.m., South Korean marines spotted something flying near the frontline Baengnyeong Island on radar, Kim said.

“The 6th Marine Brigade on Baengnyeong Island spotted something flying and fired artillery shells from Vulcan guns on three occasions for five or six minutes starting at 12:42 p.m.,” Kim said. “But the marines also reported that something landed on the island around 4 p.m., so we’re not sure whether the two objects were the same drone or not.”

The object spotted on the radar was flying 5 kilometers (3.1 miles) above the earth, so the military could not shoot it down with the Vulcan guns, whose range is about 2 kilometers.

A member of the joint investigation team told the JoongAng Ilbo that the drone on Baengnyeong Island crashed after running out of fuel, while the one in Paju crashed because of engine trouble.

“There was a sufficient amount of fuel in the drone [in Paju],” the official said. “Although we considered the possibility that it might have crashed due to a sudden gust of wind, we concluded that a defect in the engine was the cause.

“Through analysis of its photos, we found its height became irregular right after it passed the Gyeonggi region,” the official said. “There were some shaken photos, so we assumed there was some sudden shock to the drone.

“But even if there was strong wind, it would have been able to fly if its engine was working,” the official concluded.

The gas tank of the drone on Baengnyeong Island was empty, the source added.

“There was no fuel in the tank,” an official from the Defense Ministry said. “We conclude that it flew over the frontline islands in the Yellow Sea until it used all its fuel and then its engine stopped.”

The drone flew over several frontline islands in the Yellow Sea in a zigzag path, the official added, and took close-ups of some South Korean military facilities. An official of the

South Korea’s Defense Ministry said there could have been more drones from North Korea flying on the day of the live-fire exercises. “The drone that crashed into Baengnyeong Island passed Daecheong and Socheong islands [east of Baengnyeong] at around 2:47 p.m. and then fell out of the sky,” the official said. “But the unidentified flying object spotted at around 12:42 p.m. by the F-15K fighter jet and the E-737 radar [on Baengnyeong] had a different flight time.

“We can’t rule out the possibility of the existence of other drones from North Korea,” the official said. “We are investigating.”

Yoo Seong-min, a ruling Saenuri Party lawmaker, said he was briefed yesterday on the ongoing investigation by the military and the defense ministry. Yoo said the two bodies are investigating the photos from the two drones and found they include shots of several frontline islands such as Baengnyeong, Daecheong and Socheong. For the drone found in Paju, Yoo said it dipped to an altitude of 1.2 kilometers to take photos of the Blue House.

The Blue House yesterday warned local media not to print photos taken from the two drones because of security concerns. Some media in South Korea have already published photos of the Blue House’s main building, its gardens and Gyeongbok Palace taken by the drone.

“The released photos could be used by the nation’s enemy for its military strategies.”