Subway train jumps off track, but no casualties

Subway train jumps off track, but no casualties 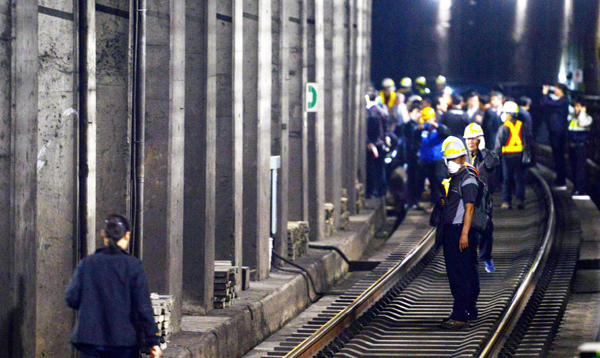 Authorities work on resuming operations after a train on subway line No. 4 jumped off its track yesterday morning at 5:12 a.m. on its way back to a garage in Siheung, Gyeonggi. Services from Seoul Station to Sadang Station were suspended. [NEWS1]

Line No. 4 of the Seoul Metro was suspended for more than five hours Thursday after a defective train derailed in the early morning.

According to officials with Korea Railroad Corporation (Korail), the train jumped the track between Sookmyung Women’s University Station and Samgakji Station at around 5:12 a.m. The train had experienced a glitch in its brake system on Wednesday and stopped at Hansung University Station at 11:50 p.m. that night. Because the train was heading back to the garage the morning of the accident, there were no passengers on board.

The suspension put a dent in many passengers’ morning commutes, inconveniencing those using line No. 4 and resulting in a massive traffic jam during rush hour.

The northbound lane running between Seoul Station and Sadang Station was completely shut down, with the southbound lane delayed by 20 to 30 minutes.

The state-run railway corporation carried out emergency repair work and resumed service at 10:23 a.m., five hours after the incident.

Korail has come under considerable scrutiny recently for the frequent breakdowns of its trains.

The train that derailed on Thursday was manufactured in November 1993 and had been operating for more than 20 years. “The exact cause of the accident is under investigation by a commission under the Ministry of Land, Infrastructure and Transport,” a Korail authority said.