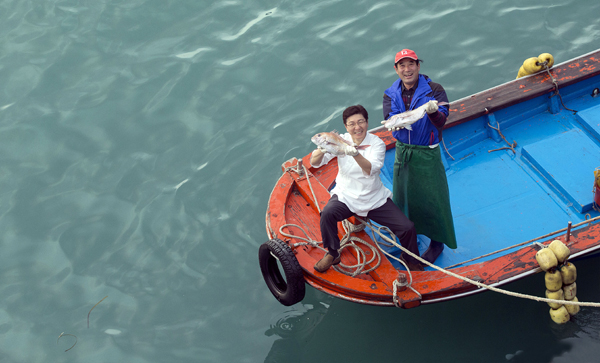 It’s spring, the season of delicious dishes. Fresh herbs such as asters, mugwort, aralia and bracken can be seen growing in the ground, and seafood like sole and webfoot octopus are at their peak.

When spring approaches, chefs at five-star hotels in Seoul get out of their kitchens - not to enjoy warm spring weather but to acquire fresh spring foodstuffs.

People say about 80 percent of the taste of a dish is determined by the quality of its ingredients. To serve the best food with fresh, high-quality ingredients, those luxury hotels organize teams and send them out all over the country.

But, contrary to what you might think, ingredient hunting isn’t glamorous. They have to visit dozens of traditional markets in rural areas, often waiting around there for hours until something arrives. They sometimes get information from mountaineers or local fishermen.

Gradually, they develop their ingredient-hunting skills and build networks to find the best foods.

And now, J-Weekend introduces the secrets of the spring ingredient hunters. It was interesting to discover that each hotel has been dealing with local middleman for varying periods of time - sometimes for two years and sometimes for 10 years.

The Lotte Hotel Seoul, for instance, buys hairy crabs from a middleman they introduced as “No. 37” at the National Federation of Fisheries Cooperatives in the east coast town of Gangneung, Gangwon. The Lotte ingredient hunters occasionally borrow a boat and hire fishermen at Samcheon Port in Sacheon, South Gyeongsang, and Jumunjin Port in Gangneung to catch the crabs themselves.

The Grand InterContinental Seoul Parnas prefers to utilize information technology. They receive photos of seafood every day from a middleman at Tongyeong in South Gyeongsang via smartphone. The Plaza Hotel, meanwhile, deals directly with a local fishery market in Gwangyang, South Jeolla, to get oysters. A fishery market in Gunsan, North Jeolla, brings webfoot octopus to the Plaza.

These hotels also try to reduce the “food mileage,” meaning how far ingredients have to travel to get to the hotel.

“Back in the 1970s and 1980s Koreans considered imported ingredients to be the best, but the recent trend is to get them locally,” said Cho Hyung-hak, head chef of the Westin Chosun Hotel.

“The best dish starts with the production and transportation of ingredients and ends up with cooking,” said Lee Tae-young, head chef of the Seoul Shilla Hotel. “The head chef manages the whole process.”

When chef Cho from the Westin Chosun Hotel visited Gurye in South Jeolla on March 13 and 14 to find herbs on Mount Jiri, the area had had more than 100 millimeters, or 3.9 inches, of rain. Cho blamed the weather, but local housewives who often gather wild herbs in the area told Cho not to blame God because rain at that time is worth hundreds of thousands of dollars as it helps the herbs grow.

A crew from the Westin Chosun Hotel has been visiting locations all over the country, including Jeongseon and Pyeongchang in Gangwon, the North Gyeongsang regions and even Ulleung Island, for years. The reason they visited Gurye was because they heard mountaineers at Mount Jiri speak positively about the herbs there. Before they started herb hunting, they visited the Agricultural Technology Center in Gurye County, which manages 1,100 local farms. 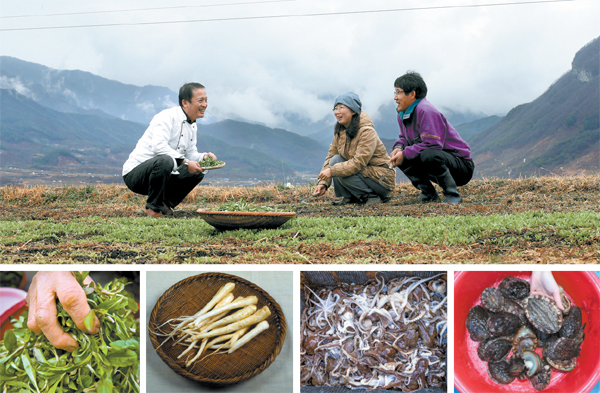 The word from the center was that, thanks to the efforts of local farmers, the herbs were especially good this year. The scents coming from the balloon flowers were better than flowers from urban areas, while the colors and smells of the chives were also much better than in Seoul. When the Westin Chosun Hotel created 200 gift sets of herbs in 2012 that each cost 350,000 won, or $331, they sold out in hours.

The hotel buys about 1.5 billion won worth of ingredients each year. About 3,800 different types of foodstuffs are used annually, and about three to four tons of materials are delivered to the hotel every day. Every spring, its larders are filled with seasonal herbs.

Chef Cho’s specialty is Western food, and he has managed a kitchen of 150 people since 2010. He travels twice a month to find fresh ingredients. “We always think about how we should change those materials into food to put on our diners’ tables,” he said. “We want to give customers the same taste as they get with Western dishes in Western countries, but by using domestic ingredients.”

When J-Weekend visited a traditional market in Gurye with chef Cho, mugwort and lettuce were all over the market. He bought some asters from some old women who said they had picked them on Mount Jiri.

Ko Young-moon, 49, is one of 13 farmers who work at an agricultural cooperative that is about 990 square meters, or 10,656 square feet, which specializes in lettuce.

“They are organic, never touched by pesticides,” he said.

The lettuce grown by Ko was later served at the Westin Chosun Hotel’s Aria buffet restaurant.

The best way for regular shoppers to get Ko’s lettuce is through the cooperative’s online shop, jirisanshop.com, which is run by Ko and his wife, Choi Moon-hee. They also sell a variety of herbs there. One kilogram, or 2.2 pounds, of lettuce cost 18,000 won last month on the website.

After driving about five hours, chef Lee Tae-young from the Japanese restaurant at the Seoul Shilla Hotel arrived in Wando, South Jeolla, where the country’s biggest live fish market is located. It sells about 15 billion won to 20 billion won worth of live fish each year.

Lee, who has been the head chef for 20 years, traveled to the country’s famous ports for about six months in 2003 looking for the best seafood he could find, but he said he found Wando to be magical.

“Fishes such as sea bream, flatfish, soft-shell clams and Spanish mackerel were the best I had ever seen,” Lee said. “I was a bit surprised that not so many chefs know about this place.”

Early one morning at the fish market, fish caught less than two hours earlier filled the room. The most popular was the red sea bream, which sells especially well in spring. Red sea breams generally spawn between May and June, so the best time to catch them is between March and April. Sole, webfoot octopus and sea squirt are among the most popular sea creatures to be found here.

About 11 years ago, Lee found some red sea bream he really liked in Wando, but the problem was how to get it to Seoul. He tried using a truck with a water tank on it, to keep the fish alive all the way to the hotel, but he found that the drive in a bouncing, shaky truck stressed the creatures.

Lee then created dozens of plastic boxes and attached them to each other, making something that looks like a book shelf with a small room for each book; but, instead of being filled with books, it is filled with fish. He also had another truck customized to hold a small water tank, then experimented to find the right temperature and level of oxygenation.

Since then, two truckloads a week, each carrying 15 red sea bream and flat fish, are delivered to the hotel from Wando.

The auction started at 8 a.m. About 30 buyers competed to acquire the Wando fish. The 54-year-old Ji Min-kwon has been buying fish for the hotel for 11 years.

“I only buy fishes that weren’t caught by fishing nets,” Ji said. “The best quality red sea bream are those that are about 2.5 kilograms,” or 5.5 pounds.

To buy fish and sea creatures from the Wando market, you need to attend one of the auctions, held each day at 8 a.m. and 2 p.m. Each auction lasts about an hour and a half. Individuals can’t participate in the auction but are able to buy products from the official bidders.