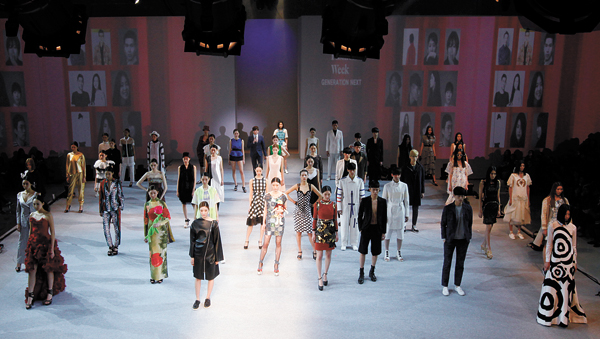 “A business event and fashion shows by Korea’s top designers;” “the biggest collection in Korea;” “the pinnacle of the fashion industry.” Those were just some of the praises that the organizers of Seoul Fashion Week boasted on its website. The event, which concluded on March 26, aspires to be “one of the top five fashion week events” after New York, Paris, London and Milan.

So was the event successful? It seemed that way on the surface. Over six days, more than 50,000 people visited Dongdaemun Design Plaza in Seoul. More than 100 designers and brands presented their collections. But did it lead to substantial business? As of last weekend, Seoul Fashion Week estimated a total order of 1.4 million won. Each presenter sold 12.2 million won on average.

Fashion week is a contest of survival, with designers competing to sell as many items as possible. However, one designer who presented at Seoul Fashion Week said: “It’s all about participation.” Most foreign buyers invited to Seoul Fashion Week come with nearly no budget, as they have already used it all on the top four fashion weeks’ collections. Some buyers just come to enjoy the city since Seoul Fashion Week pays for travel,” the designer added. The foreign collections are held in the first two months of the year, and by the end of February, most distributors are finished ordering for the season. Because Seoul Fashion Week opens a few months later, buyers feel that it offers items that aren’t as fresh. While it aspires to be a business fair, there are other reasons for its unsatisfying outcome. In the last Seoul Fashion Week in October 2013, Seoul Mayor Park Won-soon walked the runway as a model in a fashion show in Seoul Plaza. It was a symbolic appearance. However, this year’s Seoul Fashion Week has failed as a festival as well.

While Dongdaemun is a fashion mecca, local merchants were excluded from the event. Seoul Fashion Week tickets are supposed to be free, but they were scalped. The VIP invitations and the press and buyer’s tickets were sold at 15,000 won to 50,000 won online. The tickets were also not popular among buyers or the general public. Fashion models and aspiring designers not invited to the event bought them for a premium. Celebrating its 15th anniversary, Seoul Fashion Week used to grab attention and was benchmarked by Tokyo Fashion Week. But lately, it lacks both popularity and ambition, despite the fact that fashion can be an axis in a creative economy. Meanwhile, Beijing and Shanghai, Hong Kong, Singapore and Tokyo are working fiercely to expand their fashion events.

*The author is a culture and sports section reporter of the JoongAng Ilbo.