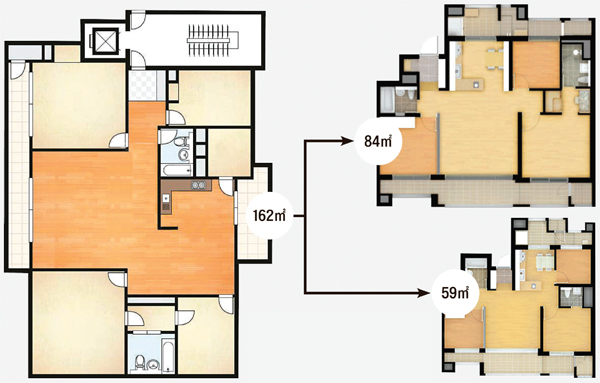 It’s becoming a trend for owners of apartments undergoing redevelopment to split their floor space into two smaller units rather than expanding floor size. Creating separate units allows the homeowner to lease the smaller unit, as shown in this blue print.

Sixty-two-year-old Kim Seong-soo, who lives in a 120-square-meter (1,292-square-feet) apartment in Gangnam, was planning to expand his floor area by 15 square meters when the building is redeveloped.

But lately, he’s considering changing his plan. Instead of expanding his apartment, he now wants to split it in two. The 85-square-meter area will be occupied by him, and the other 35 square meters will be leased out.

“With all my children living independently, the only occupants are myself and my wife,” Kim said. “We don’t necessarily need a huge house,” he added. “Instead, the lease would provide us with a stable income.”

Splitting an apartment in a building slated for redevelopment is becoming a trend in the real estate market. Before the global economic downturn in 2008, large apartments were in high demand, so homeowners profited the most from redevelopment projects focused on increasing floor area.

A decision by the government last year to allow reconstructed apartments to be split into two has added to the small apartment trend.

As a result, five apartment complexes in the popular Gangnam area will be redeveloped with split apartments instead of additional floor space.

Under the new government regulations, apartments that can be split must have an original floor area of more than 85 square meters, and one of the apartments must be 60 square meters or less after the building is reconstructed.

The Samho Garden apartment complex in Banpo-dong, Seocho District in southern Seoul, is offering seven apartment-splitting options for anyone who owns one of its 124-square-meter or 162-square-meter units.

“In our survey we found that most people wanted to split their apartments,” said Chung Yong-taek, who represents the homeowners of the Samho Garden redevelopment project. A single apartment building at Samho Garden is 13 stories high with 424 units. After redevelopment is finished, one building will be 34 floors with 835 units.

An apartment complex in Samseong-dong, southern Seoul, is also looking into splitting its units of more than 126 square meters.

“Most of the people living in apartments that are waiting for redevelopment are old people,” said Kang Sook-hee, who represents the homeowners of the redevelopment complex in Samseong-dong. “These are people who lately have been feeling the burden of living in a large apartment because management costs are expensive and it seems that the value of the apartments is unlikely to rise [sharply as they did in the past].”

Kang said the homeowners are especially interested in splitting their apartments because doing so offers a secure income that would cover living expenses after retirement.

Realtors say the monthly income from apartment splitting is better than buying an apartment and renting the entire space, and the financial burden to homeowners involved in these redevelopment projects is not as severe. Usually in a redevelopment project, the construction costs are covered by the existing owners and new buyers.

“The profit from renting out an apartment [after redevelopment] will be significant because there are relatively less small-size apartment in Gangnam [than in other areas in Seoul],” said Kim Hae-young, a relator in Banpo-dong.

According to Budongsan 114, a real estate information provider and consulting firm, 81,000 apartment units in Gangnam are pushing for redevelopment. Of those, 43 percent or 35,000 units are mid to large size.

However, after splitting the apartment, the homeowner must pay taxes on the income earned from the monthly rent and cannot sell the smaller apartment for three years after construction is completed.

The redevelopment market has recently been showing positive signs, particularly in the Gangnam area. This month, of the 6,704 units that are up for redevelopment and reconstruction, 2,150 units will be put up for preconstruction sale.

GS E&C and Daelim Industrial are competing to attract homebuyers to their redevelopment projects in Nonhyeon-dong, southern Seoul. GS E&C is working on redeveloping the former Gaenari Apartment into three 31-story apartment buildings with 408 units. Of the total, 86 units of 114 square meters are for new homebuyers.