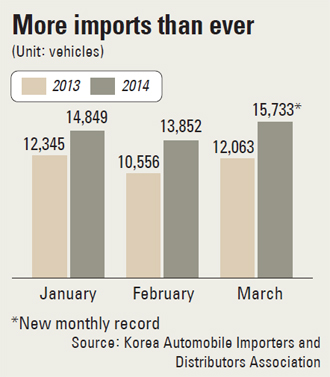 The popularity of imported cars continues to grow and last month their sales reached a record high, according to data from the Korea Automobile Importers and Distributors Association (Kaida).

By brand, BMW maintained its No. 1 status as the best-selling foreign brand after it sold 10,073 units in the first three months of the year, up 14.8 percent from a year earlier. However, its market share was down 2.42 percentage points to 22.67 percent.

BMW was followed by fellow German auto brands Mercedes-Benz, Volkswagen and Audi, and Ford managed to take the No. 5 slot.

Infiniti, the luxury arm of Japanese automaker Nissan, had impressive year-on-year sales growth of 149.6 percent after selling 654 units in the first quarter, thanks to the popularity of its midsize Q50 sedan.

Surprisingly, the import with the top increase in sales in the first quarter was ultra luxury brand Bentley, which sold 83 units in the January-March period, up 196.4 percent from a year earlier. Sales of Bentley’s Flying Spur, which costs more than 280 million won ($265,150), rose sharply.

The best-selling model in the first quarter was BMW’s 520d, which sold 2,238 units, followed by Volkswagen’s Tiguan 2.0 TDI BlueMotion and Mercedes-Benz’s E220 CDI. Of the top 10 best-selling models in the first quarter, eight were from German brands. The Ford Explorer SUV and Lexus ES300h, a hybrid midsize sedan, were the only non-German models and were ranked No. 9 and No. 10, respectively.