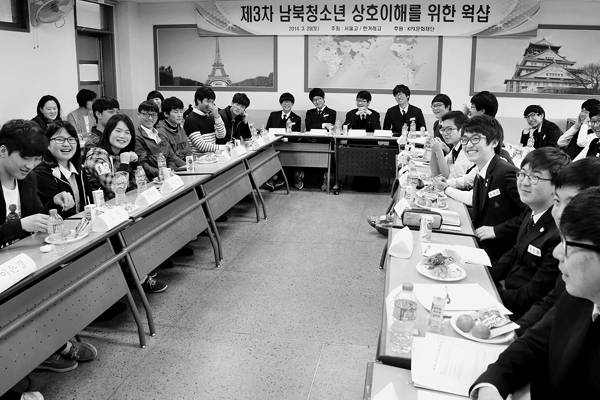 “Is it true that South Korean men are handsome and North Korean women are beautiful?” asked one junior from Seoul High School.

In response, a senior from Hangyeore High School, who is a defector from North Korea, “My dad is from the South and my mom is from the North, and it seems true to me.”

Such questions were raised by students from a school for North Korean defectors and students from the Gangnam area, the center of education in Seoul, at a forum to discuss the unification of the Koreas last Saturday.

“We can’t enjoy games or movies often due to the electricity shortage,” answered Jeong Hyeok from Hangyeore. “Instead, we play in mountains and fields for good health.”

“Well, the saying seems believable,” said Ju Hye-ji, from Hangyeore High School, chuckling. “But physical contact is more restricted than in the South.”

“That’s not true,” said Choe Yeong-seong, waving his hand. “I didn’t know it when I was in the North, but now that I’m in the South, women from the South are more beautiful and men from the North are more handsome,” he said, causing all 30 students to burst into laughter.

Though the conversation was mostly cheerful, the pupils also shared their concerns about unification and raised serious questions.

“There might be some conflicts due to cultural differences after unification,” said Kim Chan-su from Gangnam. “North Korea stuffs students’ heads with lies.”

“North Korea teaches us to idolize Kim Il Sung and his son,” agreed Jo In-deok, a defector. “It also teaches us that South Korea is an economically undeveloped country,” he added. “And I believed it, too.”

“Facing reality can change people, even if they were brainwashed,” said Jeong Hyeok. “The primary step needed for unification is to inform citizens of the North what reality is.”

The young adults also discussed the role that other Koreans their age can play to prepare for unification.

“Talking with adolescent defectors from North Korea helped me realize the importance of unification and it also helped me rid myself of prejudice,” said Seo Dong-geun from Seoul High School. “Conversation and communication are vital elements for the union of the Koreas.”

“Reunification will be helpful not only in the economic aspect but in many other ways,” said Kim Jeong-cheol from Hangyeore. “Students like us have to know the truth.”

Oh Se-ung from Gangnam said it is hard for South Korean students to take the time to learn about unification because of they spend most of their free time studying.

“Unification should be discussed in regular classes as a creative activity,” he suggested.

The students also discussed ways that they could increase interaction in order to better understand one another.

At the end of their discussion, students from the two high schools made an impromptu decision to meet up for a two-day training program during their summer vacation.

The chief manager of KPX Culture Foundation, Bae Seok-hong, who attended the meeting, said he would sponsor the students.

“Their generation should have plenty of conversation and reduce the distance between each other in order to prevent confusion and controversy after unification,” said Lee Mi-suk, a teacher at Seoul High School who organized the meeting. “A little conversation can make the huge dream, the unification, come true.”