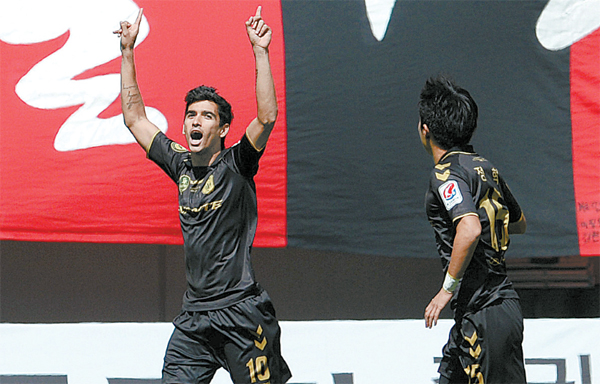 In Round 6 of the K-League Classic at Seoul World Cup Stadium in Sangam-dong, midfielder Leonardo Pereira scored after FC Seoul midfielder Yoon Il-rok fouled defender Lee Kyu-ro in the penalty area. But the 22-year-old made up for his mistake by scoring the equalizer in the 27th minute.

After receiving a header pass from teammate Kim Hyun-sung, Yoon dribbled into the opponent’s center penalty area then blasted a shot with his right foot that caromed into the net off the lower right post.

With that goal, FC Seoul extended its five-game unbeaten streak to six at home against the Motors. Jeonbuk is second in the league at 11 points with a record of three wins, two draws and a loss. The Ulsan Hyundai Tigers are in first place.

“That was a tough match,” said Coach Choi Yong-soo of FC Seoul in a post-match interview. “I think both teams were physically challenged due to an Asia Champions League match we had during the week. One good thing is that we earned one point.”

Jeonbuk Coach Choi Kang-hee put Brazilian Kaio Goncalves and Lee Jae-sung on the top of the offense line, while Leonardo and Han Kyo-won started at the wings. Veteran Kim Nam-il and Jung Hyuk were the two center midfielders.

The two clubs aggressively challenged each other, but neither could break through.

“We have to focus on recovering players’ stamina in the next few days,” Choi said. “I wasn’t able to utilize many options because I had to prepare for a match against Jeju United on Wednesday.”

In a Saturday match at Jinju Sports Complex in South Gyeongsang, the Suwon Samsung Bluewings earned one point in a 2-2 draw against Gyeongnam FC thanks to an equalizer scored by forward Bae Ki-jong in the 72nd minute. Gyeongnam FC blew a first-half two-goal lead, failing to win against Suwon for the fifth game in a row (two loses and three draws).

Gyeongnam FC had a good start. In the 35th minute, forward Kim Seul-ki lobbed a pass to Suwon’s side to Song Soo-young who was penetrating into the Bluewings’ penalty box. He connected the pass with a stunning non-stop volley with his right foot, scoring the first goal of the match.

But Suwon didn’t give up. In a free-kick situation in the 61st minute, midfielder Yeom Ki-hoon put the ball into the net with his left foot, which totally changed the mood of the match.

Twelve minutes later, the Bluewings equalized on a pass Bae Ki-jong delivered from the right edge of the penalty area by striker Jong Tae-se.