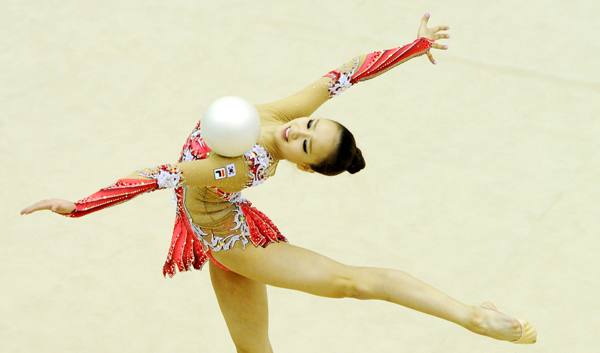 Son Yeon-jae performs at the national team selection match last May at the Taereung training center in northern Seoul. [NEWS1]

Son Yeon-jae has won her first - and the first ever for a Korean - gold medal in an all-around competition at the Federation Internationale de Gymnastique (FIG) World Cup.

At the 2013-4 FIG World Cup Saturday in Lisbon, Portugal, the 19-year-old won with a total combined score of 71.200 points in the clubs, ribbon, hoop and ball events.

The runner-up was Melitina Staniouta of Belarus who finished the event with a score of 68.150 points.

Performing flawlessly in Friday’s two events, Son took the floor with confidence on Saturday, though she made some small mistakes in clubs.

“I’m very happy for my first gold medal in a senior-level competition,” Son said. “I tried to focus on my performance and not make any mistakes. I think this result will motivate me to perform better in upcoming events. I will try to win more gold medals in the future.”

The victory came after a month of hardcore training to develop more muscles. And while she looks like she gained some weight, Son said she successfully reduced her body fat while adding muscle.

“She hadn’t eaten rice, which adds a lot of carbohydrates,” said analyst Cha Sang-eun. “Instead, she just had salad, fruits and milk. She was on a serious diet warpath before the competition.”

She also strengthened her mental preparation.

Cha said she often felt pressured to win a title, as there are so many fans expecting her to become a worldwide superstar like figure skater Kim Yu-na.

Cha added that Son has been trying to strengthen her belief in herself by reading books, including one by monk Hyemin that also influenced Lee Sang-hwa, who won the gold medal in 500-meter speed skating at the Sochi Winter Olympics.

“I think she started to believe in herself more,” Cha said. “She finally realized that she is able to win a title if she doesn’t make mistakes and stays calm during the performance. I also think that bringing a sports psychologist with her to the competition helped her a lot.”