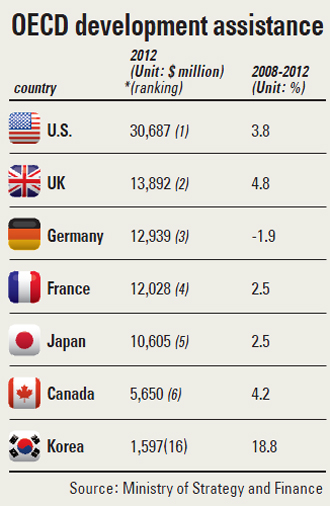 Korea’s foreign aid rose at the fastest pace in the past five years among Development Assistance Committee (DAC) members of the Organization for Economic Cooperation and Development, according to the Ministry of Strategy and Finance yesterday.

Korea increased its official development assistance by 18.8 percent per year on average from 2008-12 from $820 million to $1.6 billion, the ministry said.

That pace puts Korea ahead of the 27 other DAC members.

The average development assistance growth for the DAC over the five years was 0.8 percent annually.

For G-7 countries, the average annual growth was 1.9 percent, while the rest of the DAC countries reduced their contributions an average of 1.7 percent.

Australia recorded the second-fastest growth among DAC members at 16.3 percent, followed by Switzerland at 10.6 percent, New Zealand at 6.6 percent and the United Kingdom at 4.8 percent.

“A majority of countries have curtailed official development assistance since the global financial crisis in 2008, but Korea has increased its aid steadily,” said the ministry. “We will continue to expand assistance depending on the condition of the economy.”

In recent years, the government has launched several development programs tailored to the needs of beneficiary countries, including building a sewage facility in Pakistan in a four-year project that will end next year.

Korea also is building a children’s hospital in Cambodia that is scheduled to be completed this year. Building vocational school and providing work-related knowhow through interns from Korea are also part of the coountry’s ODA programs.

Korea joined the DAC in 2009 and pledged to increase assistance to 0.25 percent of gross national income by next year.

This year, it earmarked 2.27 trillion won for development aqssistance, up 11 percent from a last year. It needs to increase the contribution by nearly 60 percent if it wants to meet its target.