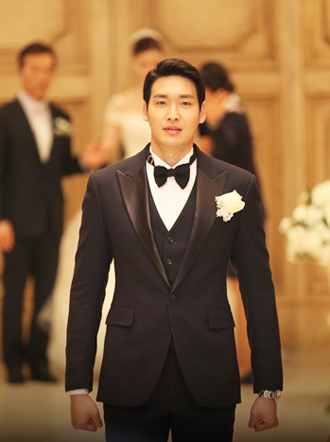 Jung Gyeo-woon of “Loving You a Thousand Times” (2009) tied the knot on Saturday with his year-older girlfriend.

The private ceremony wedding was held at Raum, a wedding hall in Yeoksam-dong, southwest Seoul. Actor Lee Deok-hwa officiated and about 400 guests including celebrities Sung Yu-ri, Jung Ryeo-won, Kim Nam-gil and Ha Jung-woo were there to send their blessings to the couple.

Jung has been dating his bride for three years after meeting her through a friend. The bride is a former model but currently works as a web designer.

At a press conference before the wedding, Jung said, “I get the feeling that we are going to live happily ever after. … I did a surprise proposal to her in front of my friends, and she accepted it. She cried a lot.”

The 32-year-old actor is starring in the SBS drama “God’s Gift: 14 Days,” and when the shooting is over the newlyweds will take off to Europe to enjoy their honeymoon.