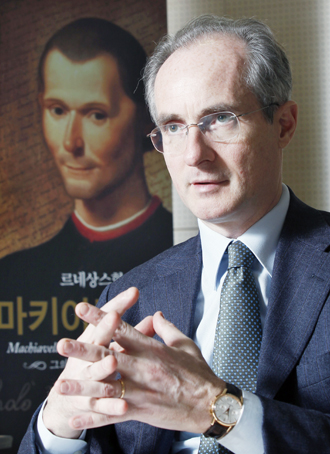 In an effort to deepen Koreans’ understanding of his native country, Sergio Mercuri, the Italian ambassador in Seoul, turn to one renowned historical scholar: Niccolo Machiavelli.

The Italian political thinker, he said, is the perfect lens through which to explain the multifaceted aspects of the Renaissance age, a period of significant cultural and philosophical achievement that began in Italy in the 14th century.

The timing is also ripe as this year marks the 130th anniversary of diplomatic relations between Korea and the European nation, as well as the 500th anniversary of the publication of Machiavelli’s masterpiece, “The Prince.”

To honor those occasions, the Italian Embassy is hosting an exhibition featuring Machiavelli’s letters and manuscripts at the National Library of Korea in southern Seoul.

The Korea JoongAng Daily recently sat down with Ambassador Mercuri to discuss how relations have evolved and how the embassy hopes to further strengthen the ties.

Q. Why did the Italian Embassy choose the Machiavelli exhibition to kick off commemorative events? What is its significance?

A. Niccolo Machiavelli exhibited a diverse capacity as a Renaissance man. The message that we would like to deliver is that a literate man was able to cover many different areas. At a time when the Park Geun-hye government is emphasizing creativity, I thought it would be useful to bring here tangible objects relating to his accomplishments as a historian, politician, diplomat and philosopher. It’s easy to illustrate the Renaissance age with beautiful photographs and structures, but the letters and manuscripts by Machiavelli highlight the period’s complexity and the political dynamics during that time. The political climate was especially challenging, and political forces were embroiled in factional fights. I believe that the exhibition can provide a glimpse into the political background rather than the art.

What can Korean people learn about these letters and documents?

We also wanted to refute the misperception that Machiavelli was simply a tactician. He is the first person who realized that reality and idealism cannot coexist. Korea is not the only country that misrepresents Machiavelli. It [also] happens in Northern European countries and Japan. The problem lies in translation or other more complicated circumstances. This is why we held a forum at the National Assembly last month ahead of the exhibition. There, the embassy gathered scholars from Kyoto University [in Japan] and the University of Sydney [in Australia] to offer a more updated reading or interpretation of what Machiavelli really meant.

The letters written by him also show that struggle, while he was also reaffirming his view of the state in defense of the republic. The core idea of the republic is that everything should belong to the republic.

Why did the embassy decide to present Machiavelli’s works at a library?

The library was an ideal place because its original function is the presentation of printed works and manuscripts. And visitors to the library are usually interested in obtaining new knowledge and culture. I also believe that they are more aware of the role of writing. Nowadays, we have different media - telephones, computers and other devices that tap into today’s advanced technology. But writing remains an important element of learning and acquiring knowledge. If you don’t write, you are a passive learner. .?.?.?Back in the Renaissance period, there were far fewer methods of learning than today. So Machiavelli heavily depended on writing to clarify his thoughts. I hope visitors will notice the value of writing in this setting.

This year marks the 130th anniversary of diplomatic relations between South Korea and Italy. What are the major achievements in this bilateral relationship?

Italy and Korea share a commerce exchange in the range of $90 billion, and it is expanding thanks to the trade agreement. But this numerical data can’t represent implications. I think one of the greatest things is that we can develop an understanding of each other’s industry, fashion and culture. In an effort to broaden the interest, the embassy encourages Italian companies, artists, musicians and designers to come to Korea and showcase their products. For example, Enzo Mari, an Italian modernist artist and furniture designer, is presenting her work at the Dongdaemun Design Plaza in the exhibition “Design Allegory of Enzo Mari Toward Utopia.” And, in July, the Korea Foundation and the embassy will hold an exhibit to explore the influence of Italy’s handicrafts under the theme “Craftsmen, Designers and Makers.”

There are a series of events to come this year to commemorate the anniversary. What’s the focus of those events?

Korea and Italy have been in touch for so many years, so the two countries need to rely on a specific event. So the series of events are in line with efforts to share knowledge and culture. They come from different institutions - some from the Italian Embassy or the Italian Chamber of Commerce, and others from the Italian Cultural Institute. They cover several areas, including music, art, commercial exchanges and scientific technological research.

As for the music, Italian pianist Giuseppe Andaloro will come to Korea to perform on April 17. We will also have a symposium to examine the two nation’s traditional food in May. So, I think the area of interest has become more specific. Through these events, I hope Italians and Koreans can relate more deeply in an array of areas.