William Shakespeare, The National Theater Company of Korea presents “Singing Shylock,” left, and the Mokwha Repertory Company presents “The Tempest” as part of their celebrations for the 450th anniversary of William Shakespeare’s birth. Provided by the company, [JoongAng Ilbo]

This year is shaping up to be a great one for fans of great writing. It’s the 450th anniversary of the birth of William Shakespeare, a half-millennium since Niccolo Machiavelli wrote “The Prince” and the anniversaries of the deaths of two major Korean writers of the 20th century.

So if you are looking for some fun activities to celebrate great writing, here are some in store for the year ahead in Korea.

All the world’s a stage

Hamlet famously said, “The play’s the thing wherein I’ll catch the conscience of the king.” And as this year is the 450th anniversary of the birth of Shakespeare (1564-1616), Korea’s thriving theater scene is full of stagings and other events related to the Bard of Avon.
“After 450 years, it wouldn’t be an exaggeration that there has never been a day when his plays weren’t performed on stage, in one form or another,” said the National Theater Company of Korea in a statement. “As society becomes bigger and more confusing, people think more about the true meaning of being human and living, and [Shakespeare’s] plays talk about the deepest ideas.”

“Shakespeare never made Shylock an icon of evil,” said the company in its press release. “Shakespeare tried to have some universality in his work by showing that no one can simply judge people one way, because anyone can be persecuted, just as Shylock was persecuted for being a Jew.”

“The Tempest” is one of the most popular choices among theaters in Korea, and the Mokwha Repertory Company is also staging the play. In fact, Mokwha’s version of “The Tempest,” modified to match Korean history, is one of the most popular pieces put on by the company, which is run by director Oh Tae-suk. While the original play centered on a conflict between noble families in Milan and Naples, Oh moved the tale to fifth-century Korea, when the Silla kingdom was fighting with the Gaya.

The company was even invited to perform their version in 2011 at the Edinburgh International Festival.

The Korea National Opera is also tackling Shakespeare, with not one but two opera adaptations. In October they will present Charles-Francois Gounod’s “Romeo and Juliet,” followed by Giuseppe Verdi’s version of “Othello” in November.

And as if there was not enough Shakespeare going on already in Korea, the Bristol Old Vic Theater will travel to Korea later this month to present its rendition of “A Midsummer’s Night Dream.”

When it comes to great writers, this year is not only about Shakespeare. It is also the 160th anniversary of the birth of Irish writer Oscar Wilde (1854-1900). To celebrate the date, the Korea Opera Group will present the opera “Salome,” composed by Richard Strauss. It’s actually something of a double-celebration, as this year is also the 150th anniversary of Strauss’s birth.

Learn to be Machiavellian

Niccolo Machiavelli wrote “The Prince” in 1513 and it has been a seminal work ever since. It has also long been popular here, and there are more than 20 translations of the controversial book into Korean.

As this year is also the 130th anniversary of Korean-Italian diplomatic ties, there will be several activities going on that spotlight “The Prince.”

Many have mistakenly interpreted Machiavelli’s book as a justification for an ends-justifies-the-means philosophy. But scholars defend the theorist, nothing that what he actually advocated was rather different than how he has been interpreted by popular culture.

“He just wanted to point out that leaders will see the end of their power when they fail to protect their country. He said that it is very dangerous to base political decisions on moral policies or to equate idealistic morals with politics,” said Kwak Jun-hyeok, co-director of the Institute for Values and Ethics at Soongsil University, at an international symposium titled “Machiavelli in East Asia” last month at the National Assembly.

But now the National Library of Korea in hosting an exhibition titled “Renaissance Style Machiavelli,” designed to help people better understand the theorist and his writings.

You may not be a prince leading a city, but there is still plenty worth learning about Machiavelli, said Maria Giovanna Fadiga Mercuri, the head curator for the exhibition and wife of the Italian ambassador to Korea.

“Machiavelli is very modern, and during the Renaissance period, having control over an individual’s own life became very important, as the value of an individual’s life reached a pinnacle,” Fadiga Mercuri said. “[What we can learn is] the capacity of fighting against misfortune and against all the obstacles that life presents to us, because we have the inner force [to become the leader of our own lives].”

To make the exhibition more eye-catching, she arranged for many items to be brought from Italy, including an original portrait of Machiavelli from the Uffizi Gallery in Florence. There will also be some other letters Machiavelli wrote from Palazzo Venezia, Rome. 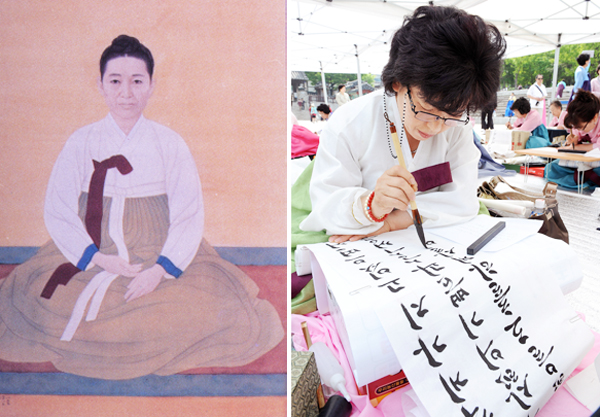 Shin Saimdang, To celebrate the 410th anniversary of the birth of Shin Saimdang, who is famed for her abilities as a mother, wife and scholar, a local group will hold several competitions. [JoongAng Ilbo]

Korean scholars for the ages

To commemorate those scholars, who dedicated their lives to inspiring Koreans to fight for independence from colonial Japan (1910-45), the Seoul Metropolitan Government has planned to examine the lives of Han and Kim, together with the Korean branch of International PEN, a worldwide association of literary writers.

To give Seoul residents a sense of how writers have been inspired in Korea’s capital city, the city government has planned literary trips that will last until October.

Many of the old houses that famous writers lived in, including Han, as well as other places they frequented to gather ideas, will be opened for tours.

Han Yong-un, Manhaedang, the place where poet Han Yong-un used to work, is part of a literary tour held by the Seoul city government.[JoongAng Ilbo]

“These are not just empty houses or the sites where writers’ houses used to be,” said the city government in its announcement. “We will discover many other places where we can still find traces of the writers and poets from the Joseon era in an attempt to make the city charming for people.”

For example, Manhaedang, a house in Jung District in which Han and others are known to have stayed while working on the independence movement, is part of the travel route. Today, that home serves as a guesthouse. Han’s home in Seongbuk District, Simwujang, will also be open to visitors.

Mount Namsan in central Seoul, which has a road named Sowol-gil after Kim So-wol, is also part of the tour.

In addition, this year marks the 410th anniversary of the birth of Shin Saimdang (1504-51), a female scholar and poet from the Joseon era. Shin is famous for being an exemplary mother and wife while also engaging in scholarly pursuits.

On May 20, the Korean Woman’s Federation for Consumer (sic) will hold its annual ceremony at Namsan Hanok Village in central Seoul so that people today can learn more about the challenges Shin had to face in her time and how she overcame them.

The federation is currently taking applications for anyone who wants to contribute their literary and painting skills or show the proper decorum for serving tea.