With China’s youth, Wave is just a trickle

With China’s youth, Wave is just a trickle 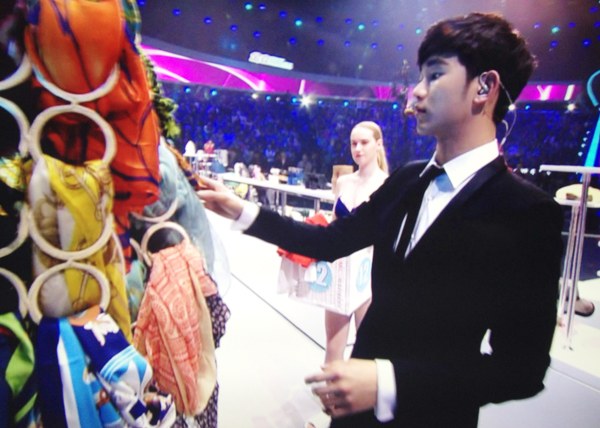 Lately, the Korean Wave is strong in China. The pop-culture boom is sweeping through the country like a storm. Young Chinese may not know the name of the Korean president, but know of Professor Do. It’s all thanks to the hugely popular Korean drama “My Love From the Star.” In China, the Korean Wave is more than a cultural phenomenon; it translates into money and business. A wealthy Hong Kong woman went through a broker to arrange a dinner with Kim Soo-hyun. The broker offered 10 million Hong Kong dollars, about $1.19 million. A power lunch with Warren Buffett goes for $1 million. Spending time with Buffett may get you a stock tip, but the meal with Kim is all about face time. The lady is determined to meet the Korean actor in person.

Kim Soo-hyun is the face of a Korean food company that opened a bakery in an apartment complex in Beijing last month. In its first month of operation, the bakery has become immensely popular. People wait in line to buy a loaf of bread. February and March is typically the slow season for tourists from China, who travel all over the world during the Lunar New Year holidays. Nonetheless, flights from China to Korea are almost always full, thanks to Chinese fans who want to visit the locations seen on “My Love From the Star.” Lee Min-ho of “The Heirs,” Lee Young-ae of “Dae Jang Geum” and international sensation Psy have become household names. It seems Korean pop culture has become mainstream in China.

But a junior at Beijing Normal University I met last month suggested otherwise. “Have you watched ‘My Love From the Star’?” I asked. He said he only watched the first five episodes, because in the end it is the same old romance. He said it failed to deviate from the cliche formula. His current favorite is “Breaking Bad,” an Emmy Award winner about a high school chemistry teacher with lung cancer who turns to manufacturing and selling methamphetamine to secure his family’s financial future. “It is different from Korean dramas. It has philosophy, logic, mystery and twist,” he said.

He may not be the only one to tire of Korean dramas. The Chinese Academy of Social Sciences surveyed more than 20,000 students at 12 universities and 39.6 percent said they watched American dramas the most. Only 7.9 percent said Korean dramas were their favorite. Four in 10 said they liked to listen to American and European music, compared to 15 percent who preferred Korean music. While most students currently use Samsung phones (16 percent), Apple’s iPhone was the most coveted device, according to the 2014 Analysis and Forecast of China’s Social Development.

The young generation in China seems disconnected from Korean dramas and products that focus on sentimental and emotional topics - a warning to the future of the Korean Wave.