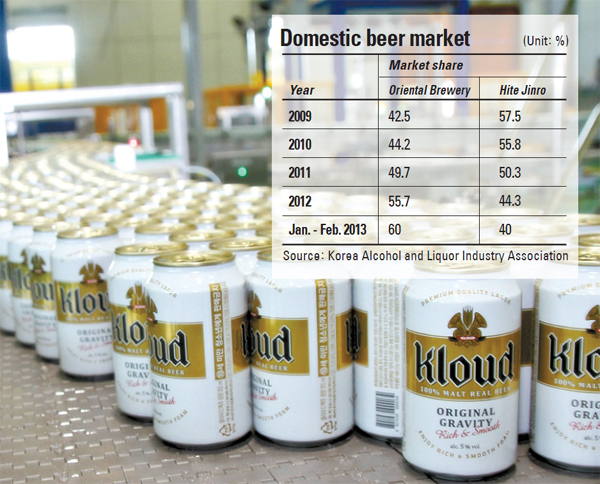 Lotte Liquor is throwing down the gauntlet in the domestic beer market by launching its first beer, Kloud.

Lotte Liquor said Friday that it is launching the new Kloud - which refers to Korea and a rich, cloud-like foam - to take on market leaders Oriental Brewery, which has 60 percent of the market with Cass and OB brands, and Hite Jinro, which has 40 percent.

The company said it will be the first beer made in Korea to use the original gravity method of production, which is used in Germany.

The gravity method does not add water to the fermented solution of raw materials, and beers manufactured that way have rich foam and taste.

At the Lotte Liquor beer factory in Chungju last Friday, an employee of Lotte Liquor poured a 330-milliliter (11-ounce) beer can into a cup on a table.

Kloud is a premium beer that uses European hops and yeast from Germany, the company explained.

“We chose the original gravity method to reflect the consumers’ dissatisfaction over the taste of beer currently available,” said a spokesman for Lotte Liquor.

“In order to emphasize that it is Korean beer, we used the letter K for Kloud,” said Woo Chang-kyun, marketing director of Lotte Liquor.

It also reflects its ambitions to seize the Korean beer market with richer foam, which rises like a cumulus cloud.

Opinions are divided in the liquor industry. Some say the new brand could create a whole new class of consumers. Others say the product is too different and will be shunned by consumers who are used to the taste of existing beers in Korea.

Due to the unique Korean customs of combining soju with beer, some observers say that Kloud’s entry into the beer market will not be smooth.

But Lotte has chosen to take the bull by the horns.

“People are saying that South Korean beers taste worse than North Korean beers, and it’s because we are used to the light taste of beer that goes well with soju,” said Woo. “Kloud will be a beer for consumers who wish to drink beer only.”

“As Lotte has a wide retail network and experience in sales of soju, the success of Kloud will depend on how it will utilize those advantages,” said a researcher at Hana Daetoo Securities.

Lotte is expected to set the price of Kloud higher than that of Cass and Hite and lower than imported premium beers.

“The original gravity method of manufacturing takes 10 percent more in production costs than the high gravity production method of other Korean beers,” said Kim. “Our goal is to realize the taste and quality of imported premium beers at the price of Korean beers.”

“We expect to bring a change in the history of Korea’s beer industry, often reputed as ‘boring,’ with this kind of real beer,” said the Lotte Liquor spokesman.

The company plans to introduce Kloud at the end of April after holding an opening ceremony of its beer factory in Chungju, North Chungcheong, on April 8.

The company plans to invest 20 billion won for initial marketing costs and expand its production capacity up to 500,000 kiloliters by the end of 2017 from the current 50,000 kiloliters, or 2.5 percent of Korea’s domestic beer consumption.