Small businesses set to get a boost

Small businesses set to get a boost 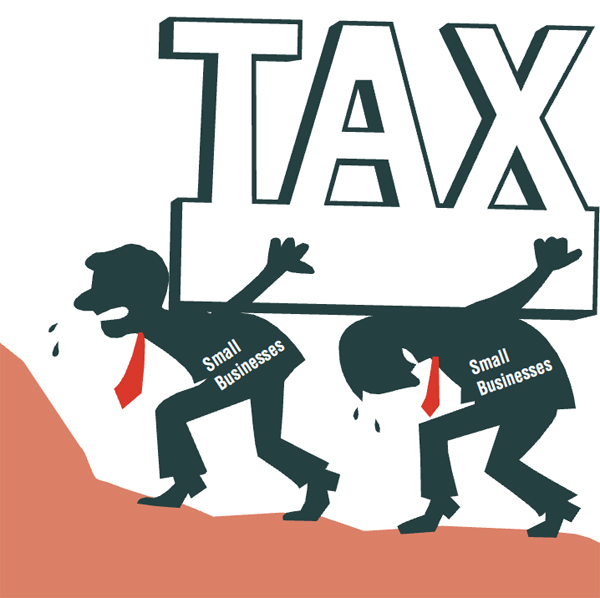 Up until a few years ago, the small Korean company Three Seven was the world’s No. 1 nail clipper manufacturer. But after its founder, Kim Hyung-kyu, passed away in 2008, its financial situation began to deteriorate.

With one simple product, the company had managed to bring in more than 30 billion won ($28.4 million) annually. But last year its revenue shrank to nearly half that at 18 billion won, and Chinese enterprise Lemay took Three Seven’s top standing. One of the primary reasons the Korean enterprise began to spiral downward was in large part due to an overwhelming inheritance tax that depleted its reserves.

When Kim’s surviving family members took over the company, they had little means to handle the 15 billion won tax that had just fallen into their laps, and were only able to manage it by selling their shares to JW Pharmaceutical.

The company’s name was changed to JW Shinyak, and after the takeover, the nail clipper manufacturing department was pushed aside for bigger projects.

The Kim family was eventually able to reacquire their old business in 2010 and restore its original name, but by then it was too late for the company to regain its former glory.

Similarly, well-known Korean company Sempio at one point considered switching to beef jerky production after the government determined in 2011 that soy sauce manufacturing was a venture more suited for small and midsize companies.

There was growing public pressure at the time for the government to protect small and midsize companies against unmatched competition from bigger businesses, which led the government to designate certain specialties, such as tofu production, to be more advantageous within the framework of smaller manufacturers.

The National Commission for Corporate Partnership (NCPP) advised Sempio to refrain from further expanding its soy sauce business - or better yet, to shrink it.

“Even if the company is a conglomerate, if it specializes in a certain field, it should be excluded from regulations [limiting certain fields to small and midsize businesses],” a Sempio official argued.

In recent years, the Korean government has been raising awareness over the need to foster and expand small businesses that hold an exceptional position in the global market or have strong potential - also referred to as “hidden champions.”

However, despite outspoken support, unnecessarily high tax rates, strict regulations and uncoordinated support are only making it more difficult for these small businesses to expand, let alone survive.

President Park Geun-hye stressed late last month during her recent trip to Germany the need to support small and midsize companies, which she said are the backbone of a thriving economy.

“We have decided to strengthen cooperation and our exchanges among small and midsize companies in Korea and Germany, so that Korean businesses can learn from Germany’s ‘hidden champions,’” Park said on March 26 during her visit.

The president’s remarks set related government departments, including the Ministry of Trade, Industry and Energy (Motie) and the Small and Medium Business Administration (SMBA), into action and are indicative of the unfavorable reality domestic SMEs face.

Hidden champions are largely blue chip companies, those well-established businesses with few liabilities that may be small in size but dominate the global market and are distinctively unique in their competitiveness.

According to the German author Hermann Simon, who wrote a book on hidden champions, Germany ranks No. 1 in the world in its number of such companies, at 1,370, followed by the United States with 336, Japan with 220 and Switzerland with 110. In Korea there are only 23 hidden champions. According to Simon, a hidden champion must rank in the top three globally, have a limited public profile and bring in less than $4 billion.

Internationally, the Korean economy ranks 15th, and leading conglomerates such as Samsung Electronics and Hyundai Motor have an undeniable presence in the global market.

But the corporate environment - particularly for small and midsize businesses - is weak, and the biggest obstacle for such companies when it comes to expanding or even surviving is the excessively high inheritance tax. 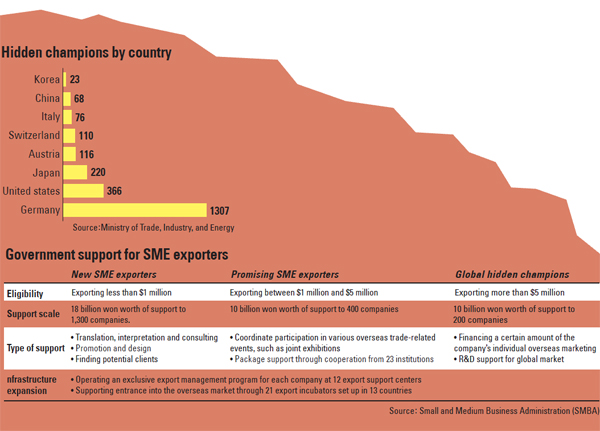 Korea levies a tax of 10 percent to 50 percent on inheritance, according to the size of the estate - the highest among member countries in the Organization for Economic Cooperation and Development (OECD) and twice the OECD’s average at 26 percent.

The burden on the majority shareholder is even larger, at 65 percent.

In January, a revised bill that expanded inheritance deductions and exempted the gift tax for small and midsize companies passed in the National Assembly.

However, not all small and midsize companies have benefited from the change. Only companies that make less than 300 billion won annually are eligible, and the deductible cannot exceed 3 billion won.

“When SMBA insisted on a tangible reformation for taxation on family business succession, the Finance Ministry scolded the administration not to defend the businesses’ interests,” a government official said.

“The revision on the inheritance tax bill [in January] is far below the expectations of small and midsize companies,” the official added. “But on the Internet, critics argued that the government was giving special treatment to those companies.”

In Germany, inheritance tax is more complicated and varies depending on the business assets involved. These are subject to special regulations, and in some instances, if a heir continues running the business, he or she may be not be liable for paying taxes at all.

Yet another issue is the ambiguous and uncoordinated support provided by different government departments and public institutions.

In recent years the SMBA, Motie, the Korea Export-Import Bank (Exim Bank) and even the Korea International Trade Association, a private organization, have been working on implementing numerous policies that would support small and midsize companies.

“We are currently working on organizing and collecting all these different policies from various departments and organizations and [combining them into one by the end of the year],” said Lee Soon-bae, an official with SMBA.

But perhaps ironically, the same policies supporting small and midsize companies are also working against them and even preventing them from expanding further.

Business owners are often reluctant to expand, as an increase would significantly reduce the amount of support they receive and leave them facing some 20 new regulations.

To prevent this from happening, many small and midsize companies try to avoid giving up their small-time status by breaking up their businesses as they grow.

Recognizing the problem, the government passed a bill in December declaring that companies that transcend their small or midsize status but are smaller than a conglomerate would still be eligible for tax breaks as well as research and development assistance.

The SMBA is also looking into using a three-year average, rather than annual revenue, as a basis to define small and midsize companies. Though, so far, these policies have a long way to go.

“We shouldn’t just copy the ‘hidden champion’ model from Germany, but renovate it and improve it so that the model can fit the Korean market.”