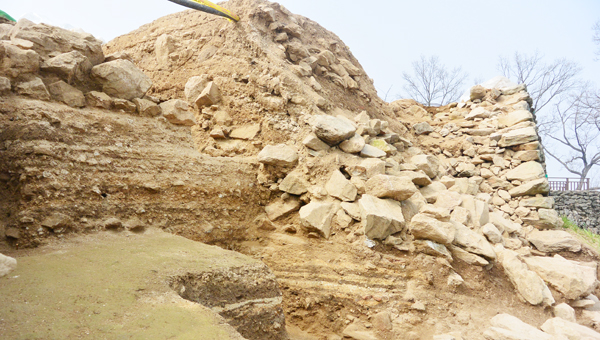 The layers of soil, seen on the left, shows how people in Baekje times built the Gongsan Fortress, which was built to protect their capital city in what today is Gongju, North Chungcheong. Provided by Cultural Heritage Administration

GONGJU, North Chungcheong - Damage to cultural heritage objects is never a good thing, but once in a while some good can come of it. That’s because most of the time, archeologists cannot touch the ancient relics, even for academic reasons. But once something happens, the repair process often allows researchers to examine the heritage objects and learn more about Korea’s history.

Case in point: Gongsan Fortress in Gongju, North Chungcheong. It was built to protect Baekje’s ancient capital for about 64 years before the capital moved to Buyeo in 538.

Last September, a part of the old wall collapsed, giving archeologists the chance to excavate and study it.

Little was known about how the wall was built by Baekje (18 BC-AD 660), one of the ancient realms from Korea’s Three Kingdom’s period. But by examining the site and studying the soil and bedrock, researchers say they now understand the construction much better.

The results of that new research was unveiled last Tuesday in Gongju, which was known as Ungjin at the time. It seemed that Baekje workers chiseled an L-shape into the bedrock, and then built the wall in layers.

“We cannot tell if the layering technique was used to build the entire fortress wall,” said Professor Lee Nam-seok of Kongju National University.

If such layers are found in other parts of the wall, then experts would be able to conclude that it was a common construction technique in that era, at least for construction on bedrock.

“However, if the layering of soil is only found in the particular area that was recently damaged, that would show that Baekje had special techniques to optimize [the construction] for the lay of the land,” said Lee.

The damaged part is located on the highest and the steepest part of land along the 2.6-kilometer-long fortress (1.6 miles), which means it could have been a challenge to make it sturdy.

“It seems that a particular part collapsed many times before due to landslides, as we see repeated attempts to rebuild the wall,” said Professor Lee.

The excavation team found a giwa, a piece of a roof for traditional buildings, which seems to have been used in the Unified Silla period, as well as parts of some white porcelain from Joseon.

It also found some plastic candy wrappers from the mid-1900s, which shows just how recently the wall had been worked on.

The exact reason for the most recent collapse was not announced, although experts believe it was because the wall was built on a steep part of land.

“Of course damage to cultural heritage objects is unfortunate, but things turned out for the better as we got to learn more about Baekje’s construction techniques,” said Kim Sam-ki of the Cultural Heritage Administration’s historic cities conservation and promotion division.

The Cultural Heritage Administration will continue working on excavating the fortress near the damaged areas until May so that it can collect more evidence on ancient fortress-making techniques. Following the completion of the restoration in August, officials from Unesco are scheduled to visit in September to see if the site can be designated a world cultural heritage site.