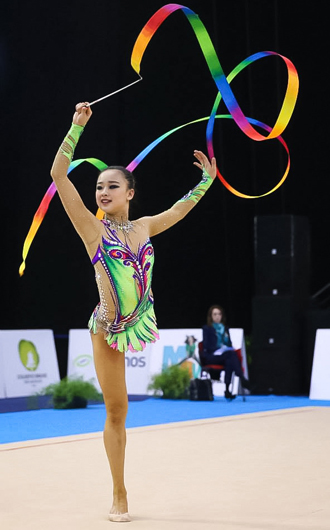 On Sunday local time, Son earned 17.500 points in the ball competition to beat Melitina Staniouta of Belarus who ended up second with a score of 17.400 points.

In the clubs event, the 19-year-old earned 17.450 points to edge Dina Averina of Russia who earned 17.250 points. Son also won the ribbon event by scoring 17.150 points, besting Arina Charopa of Belarus with 17.050 points. Son finished third in the hoop event.

On Saturday, Son became the first Korean gymnast to win an individual all-around gold medal at a senior level World Cup event. She won with a total combined score of 71.200 points in the clubs, ribbon, hoop and ball events.

She won the junior-level individual all-around in 2012.

“I’m very happy with what I have done tonight,” Son said after the competition. “In order to compete with many top European gymnasts, I spent more time in training and also upgraded the level of my programs.”

The first event was the hoop, which she performed with the theme song of “Don Quixote.” She made some small mistakes and ended up with 17.500 points.

The next event was ball, and Son was the first performer of the eight competitors. She was a little shaky with her pivots but finished the program without making any major mistakes. With a score of 17.500 points, she beat out Staniouta by 0.1 point for her second gold at the world cup.

“I was very touched when I saw the Taegeukgi [Korean national flag] hanging above,” Son said.

Son will fly to Pesaro, Italy, to participate in a world cup that begins on Friday, local time.

Analyst Cha Sang-eun said Son has been trying to develop more muscle while reducing her body fat. She said Son awoke at 6 a.m. and stayed at the gym until midnight while eating only milk, salad and fruit. She has been maintaining a weight between 47 kilograms (103.6 pounds) and 48 kilograms.

“Judges remember Son as a slim gymnast, but they were able to see her improved power and speed,” Cha said. “I think she was able to maintain her concentration until the very last moment of each program because she is stronger than before.”

Son said, “I’m happy that I made less mistakes in this world cup than I used to do. I tried to stay in calm during the performance.”