Fourth test could be fatal

Fourth test could be fatal 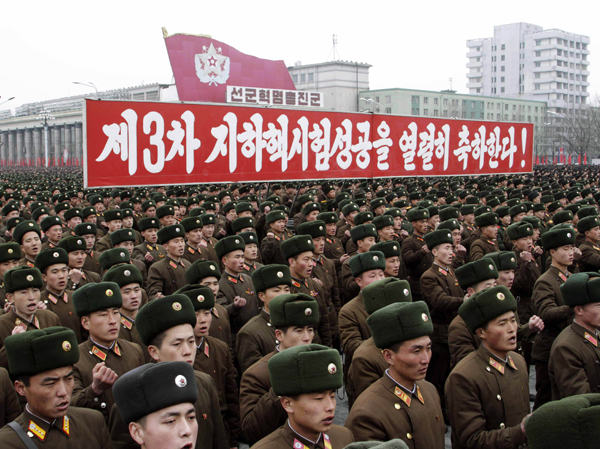 This is a hidden story that occurred right after the death of Kim Jong-il in 2011. China reinforced its forces along the Aprok (or Yalu) River and held an extensive military exercise. It was a display of strength in case of sudden changes in North Korea. When the Blue House, the ROK Armed Forces and the Ministry of Foreign Affairs protested, Beijing officially responded that they were preparing for possible mass defections from North Korea. But the ulterior motives learned through the unofficial channels were different. China said it was a misunderstanding to assume it wanted to take over North Korea in case of an emergency. In fact, China had little ambition concerning North Korean territory and already was struggling with issues in Tibet and Xinjiang. Beijing couldn’t afford the astronomical cost to govern a region of different ethnicity and language. However, China couldn’t stand still for U.S. Forces in Korea moving north of the Demarcation Line.

Today, what’s more significant than the unmanned aerial vehicles that crashed in South Korea is Pyongyang’s announcement of a fourth nuclear test. The North Korean Foreign Ministry claimed it would conduct an exercise of striking mid- and long-range targets - not excluding a new form of nuclear experiment.

Pyongyang has been tackling practical national interests with brinkmanship. Its nuclear and missile tests were also conducted according to internal political decisions. Lately, U.S.-Russia relations are at a low point over the Crimean crisis. North Korea may have calculated the possibility that the UN Security Council’s sanctions against it might loosen.

A successful fourth nuclear experiment would mean completion of Pyongyang’s nuclear weapons program. Until now, the United States had attempted to ignore North Korea with “strategic patience.” In order not to irritate U.S. voters, Washington considered it “not yet a substantial threat.”

Former Foreign Minister Song Min-soon said the North Korean nuclear threat has little diplomatic value in terms of America’s political interests. But it’s a different story if a North Korean missile with a nuclear warhead threatens the United States mainland. When voters panic, American politicians have to respond. They are pressured to act, not just talk to Pyongyang.

“If Pyongyang thinks this provides an opportunity for it to further develop its nuclear capabilities, it should give up such fantasies,” the Global Times wrote. Also, the Chinese newspaper warned that the country would face more “international isolation, poverty and risks in the Pyongyang regime if North Korea sticks to a nuclear test.”

China’s perspective on North Korea has changed drastically. China put the brakes on UN-led sanctions against North Korea after the first and second nuclear tests in 2006. But when it conducted the third test last year, China actively supported the Security Council’s sanctions. Of course, China apparently hopes North Korea will survive rather than collapse. However, it would not pay an enormous diplomatic cost to embrace North Korea’s nuclear weapons.

Kim Jong-un’s fourth nuclear test is a gamble. In fact, Libya and Iran wanted to show off their capacity to develop nuclear weapons rather than the weapons themselves. But North Korea has used all the tricks to openly arm itself with nuclear weapons. It would not give up the program, which it considers a lifeline. Its leaders have given the people a fantasy that the economy will recover when it has nuclear weapons. It is too late for the North Korean economy to revive on its own. In order to pretend to be a “strong and powerful country,” it has no choice but to treasure the nuclear program.

As we have been living with threats of long-range and multiple rocket launchers, a fourth nuclear experiment is not that surprising. We should not panic and overreact. Instead, we are curious how North Korea’s fate would turn after a successful test. The virus of truth has already penetrated the land through mobile communication and trade with China. If the international community doesn’t try to flatter North Korea when Pyongyang has nuclear weapons and instead elevates sanctions and pressures, what would it do?

A cult leader may promise glorious salvation, but when nothing changes on the promised day, he would be faced with a tragic ending. No iron rule has fallen because of poverty or external pressure. When vision and hope disappear internally, the real crisis strikes. No dynasty can last when the loyalty and faith of the people crumble.

*The author is a senior editorial writer of the Joongang Ilbo.