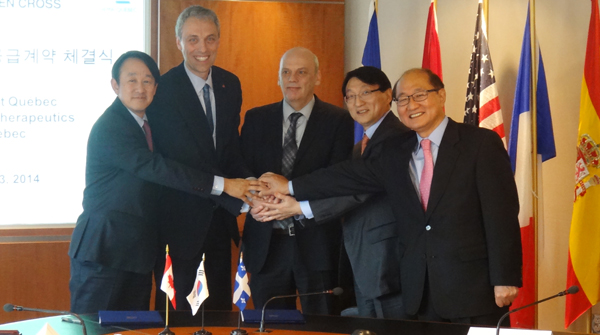 Officials pose after the signing ceremony at Investissement Quebec’s headquarters in Montreal, Quebec, last Friday. Provided by the company

Green Cross, a local biopharmaceutical company, said yesterday that it will build a biologics manufacturing facility in Montreal, Quebec, in an effort to break into the North American market.

Construction will begin later this year, and by 2019 the plant will be making products such as intravenous immunoglobulin (IVIG), which is used to treat autoimmune diseases.

As part of the project, Green Cross Biotherapeutics, a Canadian subsidiary of Green Cross, established in February, signed an agreement with Investissement Quebec on Friday in Montreal for $25 million Canadian dollars ($22.79 million) worth of financial support and tax benefits. Over the next five years, the company will invest a total of 180 billion won ($170.4 million) in the project, it said.

Green Cross, which is based in Yongin, Gyeonggi, manufactures plasma-derivatives, preventive vaccines and therapeutic antibodies.

“This investment will demonstrate our long-term dedication to patients in the North American region who rely on plasma-derived medicines and will create hundreds of full-time jobs in Montreal,” said Huh Il-sup, chairman and chief executive of Green Cross.

According to the company, Canada currently imports all of its plasma-derivatives from overseas, including IVIGs. However, with the new Green Cross plant, the country will be able to domestically produce IVIGs and maintain a steady supply.

Construction will begin this year, and when complete, the facility will be able to process up to one million liters of plasma every year and create products like IVIG and albumins, which induces clotting for bleeding disorders. Green Cross said that its Canadian affiliate has signed an agreement with Hema-Quebec to supply IVIG products for five years after production begins at the plant.

“North America is an extremely important market for us,” said Kim Young-ho, president of Green Cross Biotherapeutics. “The market for IVIG particularly is booming with Canada, one of the world’s highest per capita users, and North America making up more than 40 percent of the global plasma products market.”

Kim said the company expects annual sales to reach 300 million Canadian dollars over the next decade.

“We look forward to delivering safe and high-quality medicine to Canadians, and we will make our best efforts to provide our plasma-based products to patients in other parts of the region as well,” Kim said.