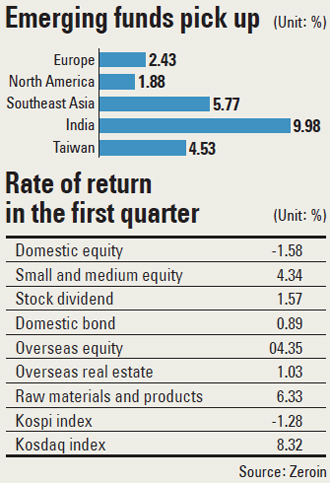 Since the beginning of the year, global stock markets have faced countless challenges. Emerging markets plummeted as the U.S. Fed began tapering its stimulus policy, the economy slowed in China and the Ukraine crisis emerged.

On top of that, when domestic companies posted results that fell short of expectations last quarter, foreign investment ebbed.

When passing through a reef zone, it is easier to sail a small boat that can be quickly maneuvered.

It was the same with funds. When the JoongAng Ilbo and the fund assessment company Zeroin rated first-quarter performance, the earnings rate of domestic equity funds was minus 1.58 percent, but the small and medium stock funds yielded a 4.34 percent rate of return.

Funds that invested in small and medium cap stocks showed notable performance, thanks to the rapid progress of the Kosdaq.

While the Kospi index fell 1.28 percent in the first quarter, the Kosdaq index gained 8.32 percent.

As a result, small and medium stock investment funds accounted for five of the top 10 domestic equity funds.

The size of these funds also is small, with the Alianz Best Small and Medium fund being the only one of more than 100 billion won ($94.7 million). The No. 1 rate of return was the Dongbu Bio Health Care fund at 11.29 percent.

“In the first quarter, individual shares actively fluctuated in the index,” said Hwang Yoon-ah, a researcher at Zeroin. “Small and medium share funds would have had advantages over large caps in responding to the market changes.”

With such global market jitters, stability is prioritized over profitability. Funds that focused on stable dividend income were listed among the top-earning funds.

Meanwhile, the average rate of return of overseas equity funds was rather sluggish at 4.35 percent compared to domestic funds.

The prevailing view of brokerages and asset management companies that developed nations would be better than emerging markets in 2014 turned out to be the opposite of reality.

According to fund ratings for the first quarter, emerging market funds such as Southeast Asia (5.77 percent yield), India (9.98 percent) and Taiwan (4.53 percent) outperformed the Europe fund (2.43 percent) and the North America fund (1.88 percent).

When former Fed Chairman Ben Bernanke first mentioned the tapering of stimulus measures, emerging markets plummeted. In particular, the impact on nations with trade deficits such as India and Indonesia was strong.

However, the governments of these countries soon took countermeasures such as raising interest rates to stabilize currencies.

“They are in the process of recovery, as they fell too sharply last year,” said Oh On-soo, a research fellow at Hyundai Securities.

India funds, in particular, rose higher on expectations that the coming general election in India will boost the economy.

Expectations are also growing due to the inflow of money since mid-March into emerging market funds, which have seen outflows since the end of October.

However, some market observers say it is still early to raise expectations.

“Funds flew into both emerging and developed markets equity and bond funds as the Fed’s position changed to extend the stimulus for some time,” said Kim Hoon-gil, a research fellow at Daishin Securities.

“There has been a change in the flow of global liquidity, rather than an improvement in the fundamentals of emerging markets.”

Those frontier market funds that did not benefit from U.S. stimulus policy also picked up in the first quarter, posting a return of 8.91 percent.