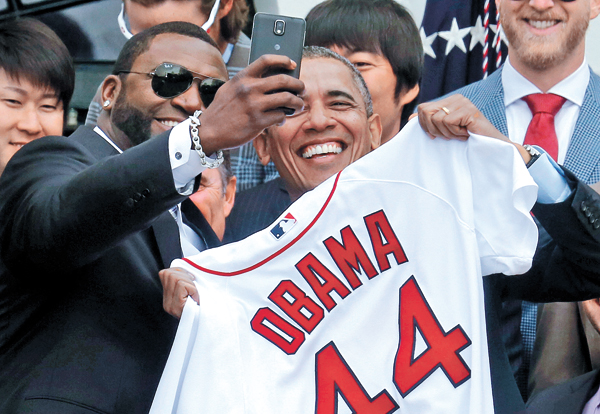 U.S. President Barack Obama poses with player David Ortiz for a selfie as he welcomes the 2013 World Series champion Boston Red Sox to the South Lawn of the White House in Washington on April 1, 2014. [REUTERS/NEWS1]

The controversy over a selfie that inadvertently made U.S. President Barack Obama a pitchman for Samsung smartphones may head to court.

And, according to one of Obama’s advisers, it could spell doom for all presidential selfies in the future.

Dan Pfeiffer, White House senior adviser, said on CBS’s “Face the Nation” Sunday that the White House had “conversations” with Samsung about the issue and expressed its concerns.

“We’ve left that conversation between the lawyers,” Pfeiffer said.

Ortiz, the 2013 World Series MVP who was visiting the White House along with other winners of the 2013 World Series, took a selfie of himself and Obama while presenting a No. 44 team jersey to the 44th U.S. President. Like DeGeneres at the Oscars, Ortiz took the selfie with Samsung’s latest phablet, the Galaxy Note 3.

Ortiz posted the photo on his Twitter account and Samsung then retweeted it to more than 52,000 followers. In the retweet, Samsung said it was “taken with a #GalaxyNote3.”

“We were thrilled to see the special, historic moment David Ortiz captured with his Galaxy Note 3 during his White House visit,” Samsung said in a statement Tuesday. “It was an honor to help him capture such an incredible and genuine moment of joy and excitement.”

But views turned negative after Ortiz was found to have signed a deal with Samsung in recent months to be a social media ambassador for the company. That raised the suspicion that Obama was sandbagged in a marketing ploy.

The White House was quick to frame it that way. “As a rule, the White House objects to attempts to use the president’s likeness for commercial purposes,” said White House Press Secretary Jay Carney Thursday. “And we certainly object in this case.”

Pfeiffer stressed the fact that Obama did not know Ortiz was associated with Samsung when he allowed the picture to be taken. He warned that the White House won’t allow any more selfies with the U.S. president. “Perhaps maybe this will be the end of all selfies,” Pfeiffer said.

Ortiz denied that it was a calculated act or that Samsung instructed him to take the photo in an interview with the Boston Globe.

“When people went crazy over that, you don’t get to see anything like that every day .?.?. It wasn’t anything promotional, anything like that,” Ortiz said. “I mean, who knows that you’re going to take a picture with the president? How many people can guarantee that? It was something we don’t even have to talk about.”

Samsung also denied such speculations to the paper, saying, “When we heard about the visit to the White House, we worked with David and the team on how to share images with fans. We didn’t know if or what he would be able to capture using his Note 3 device.”