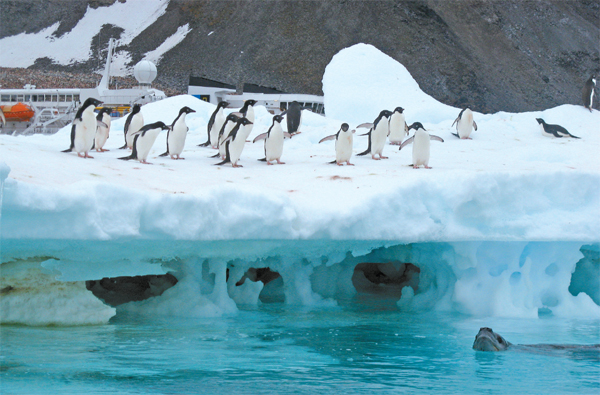 Penguins wait anxiously as a leopard seal, their natural enemy, stalks in the water in Antarctica. By Hal Piper

ANTARCTICA - On the first morning across the Drake Passage, we saw a wandering albatross, rising and dipping, skimming the waves, alone and silent in the vast Southern Ocean.

The second morning we wandered among cacophonous penguins - hundreds of penguins of multiple species, squalling and chirping as they fussed over their downy chicks.

Antarctica is often called an “ice desert,” but there is abundant life here, though the harsh climate makes for strange anomalies. The top land-based predator is a tiny insect that feeds on a tinier insect. All the other animals that you see on land - penguins, seals, seabirds - are not land-based; they spend most of their life in the ocean or over it.

The White Continent is the coldest, windiest and driest continent. Its interior is covered by an ice sheet averaging three to four kilometers thick (1.5 to 2.5 miles). Glaciers at its coastlines “calve” freshwater icebergs into the saltwater sea.

It was the last part of the Earth to be explored, just a century ago. There are seasonal research stations operated by about 30 countries, including Korea’s King Sejong Station on King George Island. But there are no cities in Antarctica, and no citizens of Antarctica. The continent belongs to no country. Territorial claims to portions of the continent are unrecognized internationally.

But Antarctica’s remoteness is waning. Now some 40,000 tourists visit the ice desert annually.

Tours are possible only in the austral summer, December to March, when it is winter in northern latitudes. During this time, Antarctic temperatures are likely to be a little warmer than those of a winter in Seoul - 0 to 5 degrees Celsius (31 to 41 degrees Fahrenheit). But even in summer there is ice, so most tours use cruise ships large enough to manage light ice and stable enough to handle rough seas.

Our “expedition” (the organizers hate the word “cruise,” which suggests casinos and shopping) was a joint production of Lindblad Expeditions, a cruise-ship company, and the National Geographic Society, an American scientific and educational institution.

A dozen naturalists accompanied us. They knew about penguins and seals and birds, about ice, about underwater life, about the history of the continent, about photography. Any question you had, someone had an answer.

We cruised south from Ushuaia, Argentina, the world’s southernmost city located at the tip of the South American continent, crossed the Drake Passage, the burial ground of many ships in the age of sail. Here, the ocean is rough because multiple seas are bumping together. The Southern Ocean swirls clockwise around the Antarctic continent. As it does, it meets currents from the Atlantic, Pacific and Indian oceans. Things get turbulent. 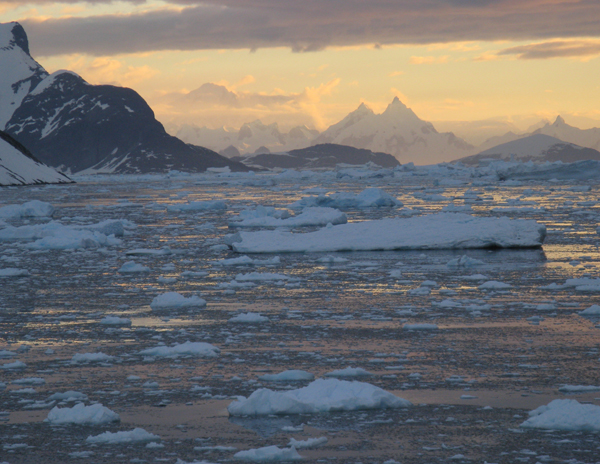 A sunset at the Antarctic Circle. By Hal Piper

Suddenly the temperature dropped dramatically. The sea calmed. The marine life - fish and squid and the rest - changes. We had crossed the Antarctic Convergence where all the waters meet at the bottom of the world. Though land was not yet visible we had entered a new habitat; we had entered Antarctica.

Beautiful, yes, and surprisingly colorful. Light and shadow played across sea and land. Even the ice reflected a prism of colors from pale greens and yellows to vivid blue.

Antarctica is shaped rather like an eccentric stingray. The “tail” is a peninsula reaching up toward South America, with many offshore islands. The islands and the peninsula are the continuation of the Andes mountain range that runs down the western edge of the South American continent. As a result, the islands are defined by cliffs and bluffs, volcanic rocks and stony beaches where we could land a rubber dinghy and go ashore to see the penguins.

Everybody loves penguins. In the water they zip like torpedoes. On shore, their waddling and squawking are comical. They totter up snow pathways and toboggan down on their bellies. They steal pebbles from each other’s nests. They scold alien chicks trying to cadge a free meal (regurgitated squid, yum!) and run their own chicks around the colony to build their stamina for life in the water. Sometimes, while attempting to leave the water, they misjudge their leap, smack into a wall of ice and fall back in.

They mass at the water’s edge, staring down, not wanting to be the first to dive in. This is prudence.

Penguins have no land-dwelling enemies, which is why we could walk among them nearly close enough to reach out and pet them (but we didn’t). The only threat to a penguin’s safety while on land is the skua, a gray-brown seabird that dive-bombs the nests hoping to snatch penguin eggs or chicks.

We saw five species of penguins - mostly gentoo, chinstrap and Adelie, but also one macaroni with an orange-feather headdress and three emperor penguins, the ones familiar from the documentary “March of the Penguins.”

In addition to the hateful leopard seal (Hey, they’ve got a job to do in the South Polar ecology), we encountered elephant and Weddell and crabeater seals that coexist nicely with penguins. 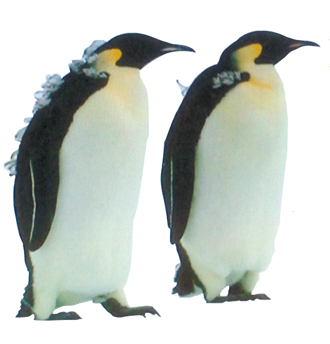 The wandering albatross that we saw the first day seemed never to flap its wings, only glide. The wings measure more than three meters across (11 feet), supporting a 1.2-meter-long (four feet), seven to nine-kilogram (15- to 20-pound) bird. Imagine the chest muscles required to flap those mighty wings. The density of the muscles alone would weigh down the bird and deprive it of flight. So it forgoes muscle mass for the ability to lock its wings into a rigid position, the better to soar effortlessly. Albatrosses have been recorded flying 300 miles in a single day in search of food.

The Antarctic food chain is pretty simple. Everything either eats krill, or eats things that eat krill. Fortunately, there are a lot of these little crustaceans. Around the continent, there are estimated to be about 400 million tons of Antarctic krill, more than the weight of all the humans on Earth.

One specialist donned her wetsuit daily and scuba-dived into the chilly depths with a light and camera. The Southern Ocean teems with colorful life - krill and anemone and strange fish and bristling starfish with up to 31 arms. Antarctica is monochromatic above ground, polychromatic below.

As our ship headed further south the days grew longer and the ice floes more numerous. We crossed the Antarctic Circle at more than 66 degrees south latitude. This is the line where on the summer and winter solstices (approximately December 21 and June 21) the sun never sets, or in winter never rises.

But we were traveling several weeks after the summer solstice, and the sun set eventually. Passengers massed on deck to take photos, snap snap snapping the sunset, which went on and on, past 11 o’clock. Then we deleted everything except the perfect sunset photo and were left surrounded by ice.

Floating ice is classified by size - icebergs have more than five meters showing above water, “bergy bits” are one to five meters and “growlers” measure less than a meter. Why “growlers”? When trapped air escapes from the melting ice, an animal sound can sometimes be heard.

“Fast ice” sticks to the shore. One day the captain plowed our ship into the fast ice and “parked” it there. We got out and walked across the meter-thick ice and saw the emperor penguins, two molting adults and a chick, all waiting for their new sea-going feathers.

The water is just above freezing, even in the summer. If you fell in, how long would you survive? It depends. If you thrash around and try to swim, hypothermia will get you in as little as four minutes. If you tuck into a fetal position and float awaiting rescue, you might last half an hour.

“We try to get you out in four minutes,” a rescue team member told us reassuringly.

But in Antarctica, temperatures have risen an average of 3 degrees Celsius over the past 50 years, faster than anywhere on earth, and they continue to rise. Penguins are moving south as the continent warms. At Korea’s King Sejong Station, 50 scientists track these changes in the natural environment.

If that 1.86-mile-thick Antarctic ice sheet should melt, the world’s sea level would rise 187 feet, enough to cover most of Seoul and all the world’s coastal cities.

But relax, it can’t happen in our lifetime. Even so, don’t wait too long to book your expedition.

*Hal Piper is a former chief editor of the Korea JoongAng Daily.