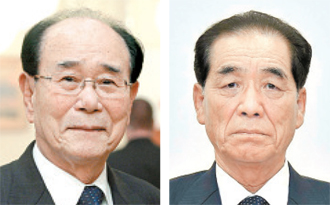 North Korean Prime Minister Pak Pong-ju will be dismissed ahead of the upcoming Supreme People’s Assembly session, a Seoul official told the JoongAng Ilbo yesterday, the second purge of his career.

“We have obtained a reliable tip-off that the premier, Pak, will be sacked to take responsibility for making little progress in improving the sluggish economy,” a South Korean government official said. “The news of his dismissal is likely to be announced at the opening meeting of the 13th Supreme People’s Assembly session in Pyongyang on Wednesday.”

A renowned technocrat in the chemical industry, Pak was an inner-circle official under the rule of former leader Kim Jong-il, who once allegedly ordered officials to “discuss every issue with Pak Pong-ju.”

He was named premier in September 2003. But four years later he was purged due to some bribery scandals and named a manager at a chemical plant in Sunchon County in 2007.

He returned to Pyongyang in September 2010 and was appointed first deputy director of the ruling Workers’ Party when North Korean leader Kim Jong-un made his first public appearance as his father’s heir-apparent. In April 2012, he was made director of the light-industry department of the ruling party, succeeding Kim Kyong-hui, the powerful aunt of Kim Jong-un and younger sister of Kim Jong-il. Pak was reappointed premier in April 2013.

Sources said, however, that Pak has been reprimanded recently by North Korean leader Kim Jong-un, who allegedly said “I entrusted him with a grave task, but he did not make an achievement in developing the people’s economy.”

“In the inner-circle of North Korea, criticism grew, [with people] saying ‘Pak Pong-ju was trapped in an outdated mind-set and he did not properly realize the will of our dear leader [Kim Jong-un],” a source said.

Along with Pak’s dismissal, sources also told the JoongAng Ilbo, Kim Yong-nam, chairman of the Presidium of the Supreme People’s Assembly, who has been in that post since the rule of founding leader Kim Il Sung, is also expected to step down.

Kim, who is the nominal head of state under the North Korean Constitution, has been in charge of greeting foreign leaders.

But he was omitted from an official list of North Korea’s assembly representatives released by state media in March. Considering the fact that Pyongyang rarely appoints a person who is not a member of the assembly to the presidium, it appears to mean Kim, one of the regime’s oldest power elite, would soon step down.

South Korean intelligence authorities are focusing on the allegation that some sedans carrying high-ranking North Korean officials were parked near the headquarters of the ruling Workers’ Party in Pyongyang last weekend.

“We assume that Pyongyang has decided several new inner-circle elite by holding a meeting of the party’s Political Bureau ahead of the assembly session,” the official said.