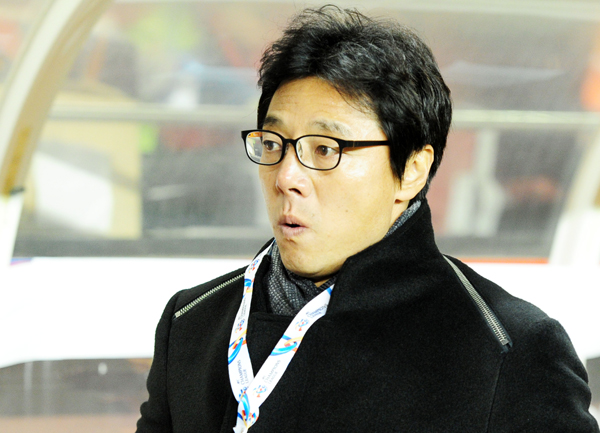 The Pohang Steelers, led by coach Hwang Sun-hong, will be looking for three points at home as the team brings a four-game unbeaten streak into tonight’s game against Gyeongnam FC in Round 7 of the K-League Classic.

The biggest worry for the 2013 season champions currently in fourth place with a record of three wins, a tie and two loses and 11 points, two points behind the league leading Ulsan Hyundai Tigers, is a defense that allowed six goals in their last three matches.

Earlier this season, the problem was offense, as the Steelers neither added foreign attackers nor re-signed their veteran forwards.

But the defense is another story. The Steelers have allowed 10 goals so far, the most in the league along with the Sangju Sangmu Phoenix. In contrast, the team’s 12 goals is tops in the K-League.

In an Asia Football Champions League match April 2 against Shandong Luneng FC of China, the Steelers dominated the match and had a 4-0 until the 85th minute.

In the next five minutes they allowed two goals, including one in injury time, squandering the four-goal lead they earned in an away match.

“Our offense has improved since the March 29 match against Sangju Phoenix, but all of a sudden, the defense is my biggest headache,” Hwang said yesterday. “I think there are no specific problems. Our defenders try not to lose their concentration during a match. We need to stabilize ourselves because it is almost impossible for attackers to be in their best shape like they used to be for the entire season.”

One piece of good news is that their veteran defensive midfielder and captain Hwang Ji-soo is back after a ligament injury to his right knee that sidelined him for three months. The 33-year-old will give more power to the team, especially by pressing opponents in midfield. The veteran also delivers accurate passes to attackers and has a powerful mid-range shot outside of the penalty box.

“I think I’m physically ready, but the question is how soon I can catch up to the game tempo,” Hwang said.

“Along with Hwang, defenders Kim Kwang-suk and Kim Won-il need to lead the team’s defense,” Hwang said. “I’m not quite sure whether I will start Ji-soo, since he just recovered from an injury, but I definitely think having him on the field would stabilize our defense.”

The Steelers are on a five-game unbeaten roll in their last five matches against Gyeongnam FC since July 14, 2012.

Meanwhile, the league-leading Tigers will face Seongnam FC at 7:30 tonight at home in Ulsan.

The Tigers scored eight goals in their last three home matches and have only allowed two goals through Round 6, which is the best in the league.