Crowdfunding a new direction for filmmaking

Crowdfunding a new direction for filmmaking 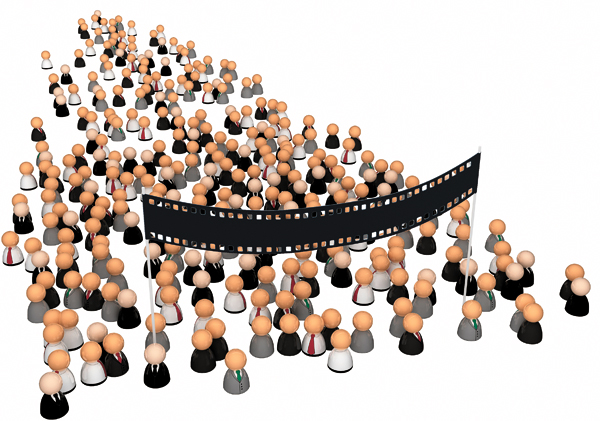 In a country that prides itself on cutting-edge technology, a documentary about a shaman wasn’t going to be a box-office blockbuster.

“Because of the subject matter, we thought it’d be difficult to promote,” said Jeon Ji-yoon, project manager at a crowdfunding website for films called Funding 21 who oversaw Park Chan-kyong’s art-house film “Manshin.”

So imagine Park and Jeon’s surprise when the film based on the life of Kim Geum-hwa, an 83-year-old exorcist, rose to the top of art-house charts last month.

“The film ended up being released at a lot more theaters than we planned,” said Jeon, still a bit shocked by the success of the taboo film, which remains in the top five.

“I guess a lot of people who were interested in preserving traditional culture sponsored us,” said Park.

In exchange, those people received VIP screening tickets and their names were featured in the credits.

While just 55 percent of the $20 million won ($19,031) target sum was collected, the money was never the point for Park. For him, crowdfunding offered an opportunity to communicate with people about his full feature debut.

“With movies like this, you can’t really advertise on TV,” says Park, who, although new to films, picked up a trick or two from his older brother, director Park Chan-wook (“Oldboy”).

More so than the sponsorship, Park sees meaning in “participation and dialogue.” It also helped that crowdfunding websites are linked to most SNS websites, which means sponsors often tweet, share and re-tweet about “their” film.

“We do promote the films in Cine21 [parent company and movie publication], but we do find that SNS is a more compatible media,” said Jeon, adding that filmmakers have begun to use crowdfunding as a means to allow individuals to fund the projects they believe in.

The truth is that if he wanted, Park easily could have found an investor with his connections in the industry, but he believes crowdfunding “fell in line” with his goal “to get people involved.”

While crowdfunded movies have been surfacing in the last two years, it’s only in recent months that filmmakers have caught on to the peripheral benefits it brings.

And in the wake of this realization, the possibilities for the medium seem limitless, as both filmmakers and crowdfunding platforms have a chance to reinvent themselves.

Compared to the United States, where websites like Kickstarter have been offering artists a platform to raise funds for the past five years, the movement in Korea and crowdfunded movies in particular were introduced just two years ago.

The three main players in crowdfunding films are the websites Funding 21, Good Funding and Tumblbug. 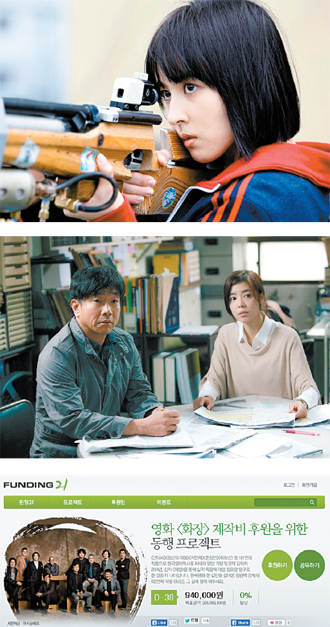 From top: The first crowdfunded film “26 Years” began the onslaught of real-life based films; This year’s “Another Family” surpassed the 100 million won (95,300 U.S.Dollar ) mark in less than a month of crowdfunding; Veteran director Im Kwon-taek’s latest film is also looking for sponsors on Funding 21.

And of these, it was Good Funding that got the ball rolling with the film “26 Years” based on a webtoon about the Gwangju uprising of 1980.

Although the manuscript for the film had been around for years prior to production, the project failed to attract investors because it deals with a sensitive event in Korean history where about 165 protesters were killed by the military.

But once the project made its way to Good Funding, the public was more than willing to help out. The film raised 380 million won, and while it didn’t reach its goal of 1 billion won, the publicity the film received was enough to attract additional investors.

As the pioneering crowdfunded film, “26 Years” paved the way for a plethora of disturbing films based on real-life cases of sexual abuse, societal ills and corruption. Despite the low budget, the fact that the films were “funded by the people” often made headlines and ensured enough publicity to draw people in.

Most recently, “Another Family,” which was released in February, put Samsung Electronics to shame by telling the tale of a young woman who died of leukemia after working at one of its semi-conductor plants.

“As the film was putting the blame on a conglomerate, it was impossible to secure investors, and at first they didn’t think it’d be able to open in theaters,” said Choi Min-ho of Good Funding.

Once up for sponsorship on Good Funding, the film raised 100 million won in less than a month and eventually pulled in 305 million won through the website and private investors.

From messages of support left on the websites, it’s clear to see that these sponsors were the film’s best marketing team.

“For them it’s not so much about how well these films do at the box office, but rather the feeling they get from contributing to a worthy cause,” said Jeon.

“Sponsors are not investors and don’t get a say in production, nor are they given any of the benefits that a donator or investor has by law,” said Jun Sang-joon, digital business department head at Funding 21.

But these sponsors don’t stop with just contributing money.

In the case of “26 Years,” sponsors rented out a theater in case the film wasn’t allowed to be screened elsewhere.

These eager sponsors - representing a wide range of demographics and political orientations - are changing the traditional business model for film production based on commercial potential.

“It’s funny, because films that look too commercial don’t fare too well with us,” said Jeon on what sort of projects attract sponsors. “Sponsors don’t want to fund movies that look fun.

Jeon said that movies “with heart” often win out over those with a known actor or a mainstream plot. 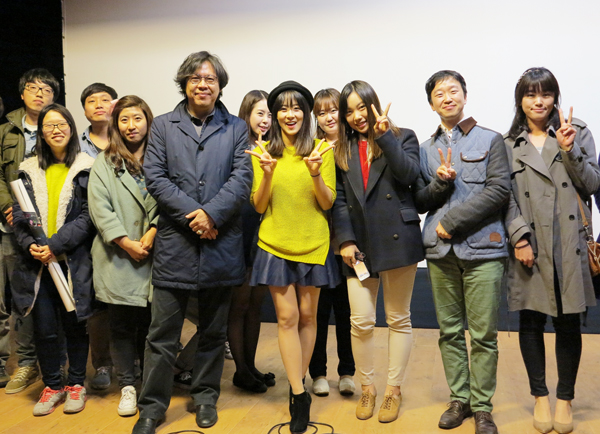 Director Park Chan-kyong, center, said it wasn’t the money as much as the marketing effect of crowdfunding that was responsible for the success of his indie film “Manshin.” Provided by Funding 21

In the case of “Another Family,” there were sponsors from across the spectrum: a 28-year-old who gave up traveling the world for a year to get behind the film, and a 37-year-old father who said it was his gift to Korea before emigrating.

The online buzz often generated by these kinds of people who feel as if they are helping to make cinematic history is the best promotion a film can have.

Platforms also are changing to suit the market. Directors can apply for crowdfunding before, during and after production.

In their early days, crowdfunding websites had an “all or nothing” approach. If the goal wasn’t reached, the money was returned.

But with money no longer the sole impetus of crowdfunding, companies are relaxing their rules.

Established in 2011, Tumblbug was founded when company representative Yum Jae-seung, a film student at the time, discovered he couldn’t use Kickstarter in Korea.

“So I thought it’d be cool to start a platform that Koreans could use,” said Yum.

Since then, more than 164 films have been given the chance to see the light of day and 92 of them reached their fund-raising goal on the website. But change was needed to accommodate those works that didn’t quite meet the target.

“Since last year, we have offered a ‘keep it all’ option where the project will still be allocated the amount it pooled,” said Yum. “This was necessary as more directors sign up with the sole purpose of marketing before the film’s release.”

The range of genres up for sponsorship is growing, too.

“Lazy Hitchhikers’ Tour de Europe” was a feel-good movie about a group of youths traveling through Europe on just 800,000 won.

Although not tied to a social issue, the film’s premise captivated sponsors and served as proof that it’s not just the films dealing with serious topics that succeed.

“The genre is mattering less and less, but the films have got to have something that people can relate to,” said Jeon.

Accordingly, both well-known and unknown filmmakers are vying for a spot on the websites, as they know that word-of-mouth publicity is priceless.

Two weeks ago, veteran director Im Kwon-taek announced he will seek funding for his 102nd film “Make-up” through Funding 21. The film’s target goal of 200 million won marks it as the website’s most ambitious project to date.

Yesterday, the film had reached 1.1 million won. But again, money isn’t everything for Im.

“Although he is an esteemed director, those in their 20s are not so familiar with him,” said Jeon. “Through SNS, we hope to be able to spread the word to all demographics.”

As crowdfunding makes the transition from a source of financing to a marketing platform for directors, another change could be just around the bend.

“We are hoping that a change in the private equity law will help us out,” said Jun, regarding the possibility of an amendment later this year or early next year that would classify films as a private investment for individuals. “It’ll be interesting to see if the decision-making process changes as people become investors.

“Will they think about the returns on the film projects or the causes behind them?”