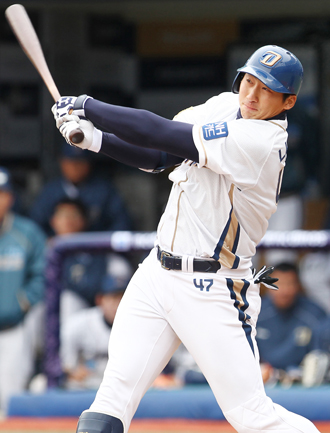 Spotlights were completely stolen by new foreign players during the first week of the Korea Baseball Organization (KBO) season. While 2013 season home run king Park Byung-ho of the Nexen Heroes struggled, Josh Bell of the LG Twins, Felix Pie of the Hanhwa Eagles and Brett Pill of the Kia Tigers showed their power with some clutch hitting and home runs.

Since the two-game weekend opening series, however, center stage has been occupied by Na Sung-beom of the NC Dinos, who showed off his abilities as a five-tool guy. In the six games from April 1 through Sunday, he hit .409 (nine for 22) with three home runs, five RBIs and one stolen base.

Before the season began, the coaching staff of the club said this 25-year-old would have a breakout season as he has made improvements in hitting, fielding and base running. Can this 2-year-old baby dinosaur be a Tyrannosaurus rex?

On Sept. 20, 2011, while the Dinos were busy preparing to join the KBO, the team announced it had finalized a deal with Na, a lefty pitcher and graduate of Yonsei University they had chosen in an amateur draft. By giving him a 300 million won ($284,000) signing bonus, the Dinos made Na the most expensive amateur to join a professional ball club that year.

Na wasn’t a dominating pitcher, but he wasn’t bad. He also showed decent hitting ability. It looked like none of his coaches in the amateur stages had determined the young man’s permanent position.

But manager Kim Kyung-moon convinced Na who is 183 centimeters (6 feet) tall and weighs 100 kilograms (220 pounds), to be a full-time hitter as he saw he could be a five-tool player like Choo Shin-soo of Major League Baseball’s Texas Rangers.

In the 2012 season of the Futures League, equivalent to the MLB’s Triple A, which was his professional baseball debut season, he led the league in home runs (16) and RBIs (67). The 25-year-old (23 in 2012) soon became a rising star who is expected to lead the Dinos for the next decade.

During spring camp, Kim moved the center fielder to right field after the team signed 33-year-old veteran Lee Jong-wook who was the Doosan Bears’ leadoff hitter. But since Na was unfamiliar with playing the corner, Kim put him back on the center field while placing Lee in the right. Kim also put Na at sixth in his batting lineup to ease pressure on him after the club imported Eric Thames, a former member of the Houston Astros, from the United States.

Such changes obviously paid off quickly.

In his second game of the season against the Tigers on April 2 at Gwangju-Kia Champions Field in Gwangju, where he was born, he hit four for four, including a two-run home run, with three RBIs and a walk and scored two runs as the Dinos went on to win, 8-7, in extra innings. He was only a triple shy of hitting for the cycle. In that game, he pretty much showed every talent of his, especially in the top of the fourth and sixth innings.

With the eyes of a hawk and an ability to make contact, Na made Tigers’ lefty Lim Joon-seop throw 14 pitches in one at-bat in the fourth. He fouled off pitches he couldn’t hit before eventually singling to right field.

In the sixth with his team leading 3-0 and a runner on first with no outs, he blasted Lim’s 128-kilometer-per hour (80-mile-per-hour) two-seam fastball, which flew 125 meters, hitting the upper right field pole. He brought in one more run in the seventh, giving the team a 7-1 lead.

With Na shining along with veteran Lee Ho-joon (.286/3 home runs/8 RBIs) and Thames (.304/a home run/3 RBIs), the Dinos are in second place with a record of 4-2 (.667 winning percentage). It is a much better start compared to last season, when the Dinos finished April with four wins, 17 loses and a tie.

As of Monday, Na had an .864 slugging percentage with an on-base-percentage (OBP) of .458. His OPS, an index combines OBP and slugging percentage, was 1.322 and he hit .500 with runners in scoring position. All of those numbers are among the top 10 in the league.

This young dinosaur said his goal for the season is 20 home runs, 20 stolen bases guy and a batting average of .300 or more. That feat was accomplished twice by his role model Choo when he played with the Cleveland Indians.

Only Lee Jung-hoon (retired), Yang Joon-hyuk (retired) and Lee Byung-kyu of the Twins have achieved this as Korean left-handed hitters in the history of the KBO.

With better teammates in the club and less pressure on himself, Na is a good bet to be the first hitter to join the 20-20 club and hit .300 since Choi Jung of the SK Wyverns last year.