Right to be forgotten is issue for our times

Right to be forgotten is issue for our times 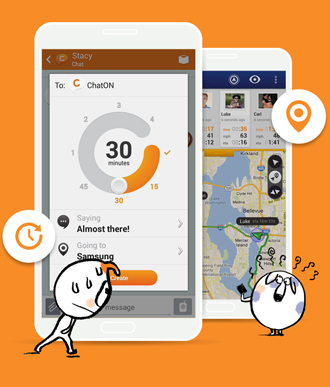 Samsung Electronics’ ChatOn instant messaging service comes with a message recall function in the 3.5 version. Provided by the company

If the Big Data craze suggests that society is giving up on protecting personal data, there are contraindications as well. A spate of privacy-enhancing apps proves there can be another way.

One example is Samsung Electronics’ ChatOn instant messaging service, which introduced a message retraction function in its latest version.

In the 3.5 version released last Thursday, ChatOn enables a user to retrieve a message that he or she regrets sending or sent to the wrong person. Even a message already read by the receiver can be reeled back. The recall of the message leaves behind a notification, “This message has been recalled at the request of the sender.”

Samsung is jumping on a trend that has been cultivated by inventive start-ups in Korea over the past several months.

The concept of deliberate, ephemeral messaging services first gained attention with the success of “Snapchat,” a photo messaging app developed by Stanford students in 2011. Snapchat, now synonymous with self-destructing messages, trades more than 3 million messages or photos a day around the world.

In Snapchat, you can specify how long you want your photo to be visible to recipients - from one to 10 seconds - and after that it disappears from the recipient’s device and from the company’s server.

Korean companies paid heed, followed by the ultimate compliment: imitation. Frankly Messenger was developed by Tic Toc Planet, a San Francisco-based start-up funded by SK Planet late last year. The instant messaging app also enables users to set a time limit on how long messages or photos can be shown, with 10 seconds set as the default.

Steve Chung, the Harvard- and Stanford-educated CEO of Tic Toc Planet, predicted that the counterintuitive idea of limiting the amount of customer data held onto - not hoarding it - could be a success with the right business model.

Local companies tried to find new models, including Brinicle, which released Dontalk in November. The messaging app has attracted more than 500,000 subscribers.

The app lets users recall messages, send messages that self destruct after a few second and even “whisper” private messages to individuals in a group chat.

If somebody tries to capture a message in a chatroom to save or reproduce, the app sends an alert to everyone else in the room.

Shot.ly, developed by Tgrape, is a service for exchanging photos of embarrassing moments. The photos are deleted within seconds after they are viewed.

Big companies are lumbering onto the bandwagon.

My People, a messaging app by Daum Communications, Korea’s second-largest web portal, also deletes photos shared after a set number of seconds. And Facebook and Twitter have come up with similar ephemeral messaging services, Poke and Spirit.

Engineered ephemerality is also being used in services other than instant messaging. ZUM internet, a five-year-old Korean start-up, recently launched Quick Sending, a file-sharing service. It limits the amount of time users can access downloaded file to 12 hours. There is no limit to the number of downloads or their size.

“As fatigue is building in a digital world in which passing into oblivion has become almost impossible, interest is growing in the value of deletion,” said Jung Sang-won, vice president of ZUM internet.

More ephemeral services are expected to make debuts as public anxiety grows about the security of their online lives. Last month, Statistics Korea described six so-called “Bluesumer” industries that had the potential to be hits. “Bluesumer” is a combination of Blue Ocean, meaning an industry with great potential, and consumer.

Those companies are aiming beyond the domestic market. In Europe, where a discussion over the right to be forgotten online has been going on for years, a law passed last month makes it compulsory for social messaging service providers to delete personal data on request.

The phenomenon was predicted by Viktor Mayer-Schonberger, a co-author of “Big Data: A Revolution That Will Transform How We Live, Work and Think,” in which the Oxford professor said humanity is entering an era where forgetting is more difficult than remembering.

“The only thing that we can do in such a situation is to be overly cautious about how things might be interpreted in the future, and that creates the chilling effects that reduce frank conversation but also public discourse and undermines democracy,” Mayer-Schonberger said in an interview with the Korea JoongAng Daily in October.