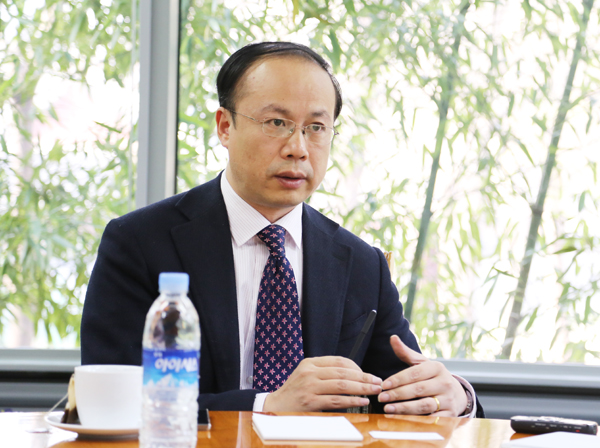 Chen Zhimin, Dean of the School of International Relations and Public Affairs at Fudan University

North Korea recently threatened that it is preparing for a “new form” of nuclear test, but Chen Zhimin, a Chinese international politics expert, dismissed the likelihood of a fourth test occurring in the near future.

“In my view, I don’t see that North Korea has reason to [do] that in the near future,” Professor Chen, dean of the School of International Relations and Public Affairs at Fudan University in Shanghai, told the Korea JoongAng Daily in an interview last week in Seoul. “[Kim Jong-un] .?.?. already conducted a nuclear test. I do believe that there was a domestic agenda there: When a leader is so young, to create legitimacy in North Korea, you need to show he is very capable. If the first one was for that purpose, that purpose is already served,” he said.

He added, “The Chinese government people certainly don’t like it. .?.?. There will certainly be consequences if North Korea does that.”

Chen was a keynote speaker at the Asan Institute for Policy Studies’ forum on China’s economic, military and global regional power on April 2, which was attended by other China scholars from around the world.

An expected visit to Seoul later this year by President Xi Jinping to reciprocate President Park Geun-hye’s China summit last June, Chen said, could hold “symbolic importance” in regard to China’s ties to South Korea. He said, “I don’t see that President Xi has scheduled a visit to North Korea .?.?. indicating this stronger relationship between South Korea and China.”

Part of it, he added, is due to “a very strong personal relationship between President Xi and President Park.”

Chen has also spent time as a fellow at the Harvard University Kennedy School of Government and as a visiting professor in Japan’s Keio University.

He said there is “a common foundation for South Korea and China to work together” to put pressure on Japan in regards to its attitude towards historical issues of “Japanese imperial occupation and invasion of neighboring Asian countries.”

Q. How do you view North Korea’s increasing military provocations recently, including its launching of medium-range Rodong missiles?

A. I think in Korean Peninsula there is a serious security dilemma. Now, we see some escalation of the tensions in this part of the world. The Chinese government and the people are also very concerned about this so-called security dilemma. Because in this security dilemma, any measures taken as a defensive purpose might be viewed on the other side as offensive. President Park was very much engaging North Korea over the last 16 months, and we have seen some improvement in the relations, like the Kaesong Industrial Complex and [inter-Korean] family reunions resumed.

But we have seen some military confrontations. In my interpretation, certainly North Korea feels this is a reaction to what the South Korea-U.S. joint large-scale, full-on military exercise, which is ongoing. Koreans might think this is not offensive, but maybe for the North Korean, this might be a preparation for a military confrontation with North Korea. I also think there is a problem of border dispute.

Has there been a shift in Chinese policy switch on North Korea?

You might sometimes even as friends speak very straightforwardly to them, sending a clear message .?.?. of China’s own interest and the interest of regional stability. But certainly North Korea would not like Chinese talking that straightforwardly. So, now we are kind of in a dilemma on what is the best way to engage North Korea. I think we need consultative efforts to reduce the hostilities among the related parties. In this case, we still believe the root problem is the distrust of North Korea toward the United States in particular. .?.?. That may be one of the main issues we need to find some solution. Without that, the other parties can do something, but we cannot solve the root cause.

What are some stronger actions that China might take in case of further North Korean provocations then?

The Chinese policy is always trying to engage North Korea, and we do feel that too many sanctions on North Korea will not be productive and maybe counterproductive because China was sanctioned for many years, and the Chinese behavior became more radicalized. Engagement we think is the best way, so that’s what China has been doing over the years. But on the other hand, we also see this engagement policy might not work as we have seen in North Korea over the past one or two years.

There have been some positive indications of a resumption of the six-party talks, especially following President Park, Prime Minister Shinzo Abe and President Barack Obama’s trilateral summit in The Hague. Can we be hopeful of a revival of the denuclearization talks in the near future?

I think the six-party talks have achieved some objectives in the past, but we certainly have noticed the process faced setbacks. But if we want to find a solution to the problem, the six-party talks are still the best venue. .?.?. I was seeing some very positive signs. At the end of last year, we saw progress between North and South. But there are always distractions, which means that the process is very difficult.

Do you think President Xi Jinping recognizes Kim Jong-un as his counterpart?

I think that I have no doubt. But there certainly should be things [that are] much more clear in North Korea. And North Korea certainly has to figure out how they want to deal with China.

Do you expect a meeting between Xi and Kim any time soon?

We will see. There are still several months to go. I think at this moment, North Korea has to show that they are aware of the concerns of other countries and the concerns of China, too.

What sort of room is there for our two countries to deal with concerns of rising tension with Japan in the region?

The Chinese believe to have normal or good relations with Japan, Japan has to have a proper view on this wartime history. ... We have noticed that in the Chinese president’s visit to Europe, and President Park’s visit to Europe, we were all raising the issue of Japanese revisionism, particularly historic revisionism. The two sides can sometimes work together in joint projects like the Ahn Jung-geun [Memorial Hall in Harbin, China].

[The Japanese government] had some change, particularly because of pressure from the United States, and some postures have been made.

Maybe they will not revise the statements based on Japanese wartime history. ... The Japanese may claim they have apologized so many times to the Koreans and Chinese. But the problem is that we don’t see the honesty in the Japanese position ... I think Japanese now feel they are on the defense in the global history war.

What is your view on Prime Minister Abe’s recent statement that he will uphold past wartime apologies by the government?

I still do not see Japan’s first priority is to mend relations with South Korea and China. All these postures were mainly results of the pressures of the United States. President Obama wanted a meeting between President Park and President Abe in The Hague, so Abe was on the pressure to make some gestures .?.?. Japan feels like it has support from the U.S., so that is enough for Japan .?.?. They are isolated in Northeast Asia but their feeling is that they are not so much isolated around the world, so that gives them a certain confidence that they can continue in this way.