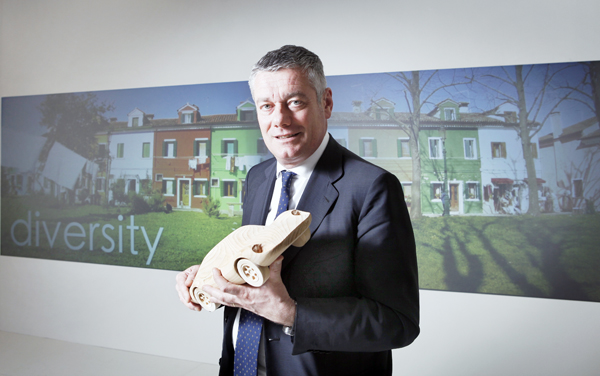 Paolo Pininfarina, chairman and chief executive of Pininfarina, the 84-year-old family-owned design company that has worked with Ferrari, Alfa Romeo and Fiat, said he is open to any kind of partnership with Korean automakers to help improve their designs.

“Today, Korean manufacturers produce cars with a very contemporary design, and their reputation in the European market has improved a lot,” Pininfarina said in an interview last month with the Korea JoongAng Daily. “But cooperation with a design house [like us] could be fruitful.”

Pininfarina was in town to attend the Seoul Living Design Fair held at COEX in Samseong-dong, southern Seoul.

Pininfarina is the son of Sergio Pininfarina, who passed away in 2012, and the grandson of company founder Battista Pininfarina. Paolo’s grandfather set up the company in 1930 as a coach building and car design firm, particularly luxury cars. The company is best known for its collaborations with automakers like Ferrari, but over the decades it has expanded into non-automotive design, including industrial and architectural design.

“During the 1990s, we supported Korean companies to design products to be exported to the European market,” Pininfarina said. “The models were called the Hyundai Matrix and Daewoo Tacuma on our continent. The collaborations didn’t last, but now we feel ready to explore potential future opportunities.”

During his trip to Seoul, Pininfarina said he had the opportunity to meet with several “entities” for possible partnership, although he declined to elaborate.

“Korea is one of the leading industrial countries in the world, and we would certainly be glad to establish design partnerships here,” he said. “I had the chance to meet with several important entities, and I believe the results are quite promising.”

Q. What are some of notable car designs by Pininfarina?

A. Probably the most well known Pininfarina-designed cars in Korea would be Maserati and Ferrari models because they are distributed in this market. If I have to select one car project out of a total of around 1,000 [cars], I would take the Ferrari Sergio, the concept car that we presented at the 2013 Geneva Motor Show to celebrate the memory of my father.

Under your leadership, Pininfarina has expanded into non-automotive designs like furniture and home appliances. What is the portion of that business out of total sales?

The non-automotive design business now represents about half of the total [sales]. Pininfarina Extra develops about 20 design projects yearly for more than 50 clients. More than 500 projects have been done, up to date, and three of them may be considered successful milestones: the kitchen Snaidero OLA (1990) in the sector of industrial design, the interior design of the Juventus Stadium (2008) and the architectural project Ferra in Singapore (2013).

You joined Pininfarina in 1982. What changes have you seen in the overall design industry?

The world of design has changed very much in the last 30 years. The design movement has become much more global and people have become aware that through good design it is possible to address environmental problems and to achieve a better quality of life.

Italy is known for design. Do you believe Koreans are also taking more notice of design in products?

Supported by the strength of big corporations like Hyundai, Kia, Samsung, LG and others, Korean design is becoming more and more powerful. However, my impression is that probably due to the tradition of the country, design is still quite engineering driven and it could be a little more “emotional.”

Many countries, mostly in Europe, have been hit by the global economic crisis that began in 2008. Has your business been affected?

Since 2008, we have restructured the company, reoriented our vision on design, engineering, brand development, limited-edition manufacturing, and now we’re relaunching the company, focusing activity in the areas where our skills and our brand are perceived as more valuable.

Pininfarina is a family-owned company founded in 1930. What are the elements to success?

Through the years, we have been quite successful in combining our tradition with a strong attitude towards innovation. Also, we have kept our design and engineering skills, and our brand has never lost its special identity and prestige.