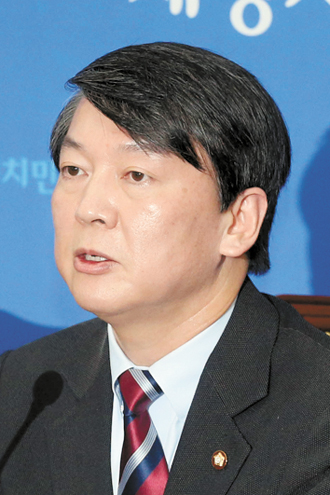 In an abrupt turnaround, the co-leaders of the New Politics Alliance for Democracy declared yesterday they will conduct a survey of party members and the general public to see if they should keep or abandon an election promise to forego nominating candidates for lower-level positions in upcoming local elections.

The announcement by former tycoon and independent presidential candidate Ahn Cheol-soo and former chairman of the opposition Democratic Party Kim Han-gill was interpreted as a step toward ditching its pledge to clean up politics and follow the lead of the ruling Saenuri Party, which walked away from its own promise in February.

“We are now heading toward a race where the ruling and opposition parties are going to compete under the two different rules,” said the somber-looking Ahn before reporters at the National Assembly yesterday.

“I decided to ask the people and party members about terminating the nomination system,” he continued, “and follow their advice in order to end an ongoing dispute ahead of the elections.”

The major opposition party hired two public opinion research firms to conduct a survey of its party members and adults nationwide between 9 a.m. and 8 p.m. today, asking them whether the NPAD should keep its promise not to nominate candidates for city, district and county councils in the four local elections.

The outcome will reflect a 50-50 weighting for each group, party members and the public. Party officials said the result will be available tomorrow morning.

The NPAD’s announcement yesterday came only a day after it slammed President Park Geun-hye for rejecting the opposition’s request to talk about the issue. Ahn made an unannounced visit to the Blue House Friday to demand Park meet him on the issue. On Monday, Park sent her political affairs secretary to the National Assembly to tell Ahn and Kim that it was up to the political parties to settle the issue, not her, although she did campaign on the no-nomination promise in the 2012 presidential race.

Park’s blowing off of Ahn’s challenge left him little choice but to walk away from his long-held pledge, which was supposed to reform Korean politics at the grass-roots level, and blame the president and ruling party for having to do so.

Ahn’s decision to go along with a poll came amid growing anxiety within the party that the Saenuri Party was sailing through the controversy over the nominations unscathed and that the NPAD was going to lose the local elections in a big way.

During the 2012 presidential election, both the Saenuri and the Democratic Party promised they would stop nominating candidates for city, district and county council. (The DP merged with Ahn’s supporters to create the New Politics Alliance for Democracy, or NPAD.) The idea was to remove party politics from elections at the grass-roots level and end certain corrupt practices.

The Saenuri Party, however, went back on its promise in February, fearing that party-less elections would be a mess. If the national parties don’t control nominations, more than one candidate can run on the conservative or liberal side, splitting the vote. And in a polarized political environment like Korea’s, voters are used to voting based on the ideology of the candidate - conservative or liberal.

During the press conference yesterday, Ahn said if the opposition kept its promise not to nominate candidates and the ruling party didn’t, it would be like a race with one contestant running down a thorny path while the other ran down an expressway.

The former presidential hopeful squarely blamed the president for walking away from political reforms. “There is nothing we can do [to fix the situation] with the president refusing to talk and the ruling party flip-flopping on the issue,” he said.

On Park’s rejection of his demand for talks on the issue, Ahn said, “It’s like someone setting off a fire and doing nothing but only standing by and urging others to put out the fire [that she started].”

The former software mogul’s willingness to walk away from his big idea for political reform, or “new politics,” is expected to deal a blow to his leadership of the NPAD.

Some members are already expressing their disapproval of the poll, saying Ahn should stick to his promises of political reform.

“This decision is a foolish one,” snapped Representative Cho Kyuong-tae of the NPAD before reporters yesterday. “If the outcome of the vote is in favor of keeping the party nominations, it will mean that we will have to break our promise, the very thing that we have criticized the ruling Saenuri Party for all along.”

Identifying himself as a politician who can bring about an era of “new politics,” Ahn had pledged to follow through on his campaign promises, and the no-nomination promise was one of the founding principles of the NPAD, which was launched last month through a merger between the Democratic Party and followers of Ahn.

“The new party will uphold a promise to get rid of party nominations for lower-level administrative posts and pursue political reforms to fix persistent malpractices in the political establishment,” said Ahn on March 2 when announcing the formation of the new merged opposition.

The Saenuri has claimed it is the responsibility of a political party to field candidates and prevent incompetent, corrupt figures from running in elections.