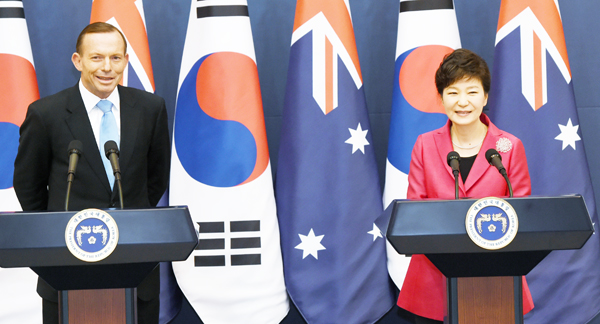 The free trade agreement with the world’s 12th-largest economy marks the 11th such pact for Korea. If both countries have the deal endorsed by their legislatures in the latter half of this year, the agreement will go into effect next year.

“Australia has a high portion of trade volume with Asian countries at 60.8 percent of its total and has clinched multiple free trade pacts with Asean nations, thus making competition among Asian countries within Australia fiercer,” said a statement from the Blue House yesterday.

“Korean corporations’ securing of competitiveness in the Australian market is expected to get a boost from the Korea-Australia FTA.”

Under the agreement, levies on all Korean cars will be eliminated within three years, whereas a 5 percent tariff on gasoline vehicles with engine displacements between 1 liter (0.26 gallon) and 3 liters will be lifted immediately, making them the biggest beneficiaries of the deal.

On the other hand, tariffs on Australian beef will be removed over 15 years, which is expected to deal a blow to Korean beef farmers. Beef from down under already holds the top market share in Korea, 56.9 percent.

Australia has the potential to ratchet up trade with Korea, according to government data. It has the world’s fifth-largest per-capita gross domestic income at $65,841 as of 2012.

At a summit in the morning with Australian Prime Minister Tony Abbott at the Blue House before trade ministers of both countries signed the pact, President Park Geun-hye stressed that Australia is “a very precious partner” that joined in the 1950-53 Korean War and has closely cooperated with Korea on the international stage because of the two countries’ common basic values.

The Korea-Australia FTA will be a systematic framework for deeper economic cooperation between the countries, Park said. She also told Abbott that Australia was her first overseas destination, in 1968, when she accompanied her father President Park Chung Hee. She was 17 at the time.

Korea is signing a trade pact with the world’s sixth-largest country by area less than a month after signing a similar agreement with Canada, illustrating President Park’s focus on international trade and exports.

But when asked by reporters if the new trade pacts are aimed at putting Korea in a better position to join the 12-nation Trans-Pacific Partnership, potentially the world’s largest trading bloc, which is led by the United States, Park denied it. The FTA with Australia “is a separate matter with [Korea’s] participation in the TPP,” she said.

Abbott was in Korea to complete the trade agreement following nearly five years of negotiations.

He met with Japanese Prime Minister Shinzo Abe on Sunday and Monday and successfully concluded seven years of negotiations on a trade deal.

Australia currently has seven FTAs in effect with countries including the United States, Chile, Singapore and New Zealand, and talks with China are still under way.

Park and Abbott adopted a “vision statement on a secure, peaceful and prosperous future” following their summit.

Consisting of 22 articles, the statement says the two allies vow to work more closely with each other to address diverse security challenges, to develop a blueprint for further cooperation in security and defense, and to achieve the complete, verifiable and irreversible denuclearization of North Korea.