Tayo and friends to feature on more Seoul buses

Tayo and friends to feature on more Seoul buses 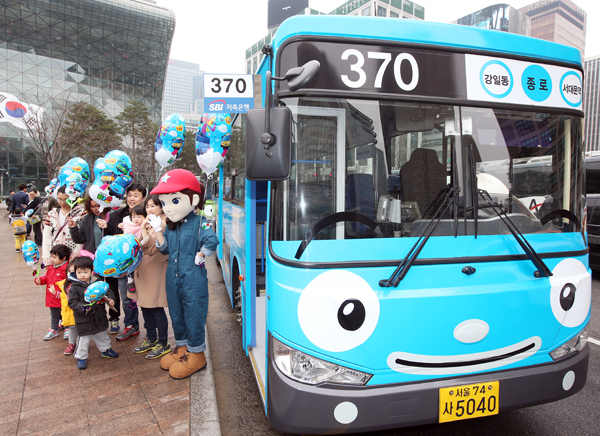 The first passengers to ride the city buses inspired by “Tayo the Little Bus” last month wave their hands at the Seoul Plaza in Jung District, central Seoul. [NEWSIS]

For many children in Seoul, seeing Tayo and his friends sprawled across the city’s buses might just be like a dream come true.

The bus project, featuring characters from the animated television series “Tayo the Little Bus,” was initiated on March 26 as a one-month event to mark National Public Transportation Day. But thanks to its enormous popularity, especially among kids, the Seoul city government decided to extend the operation until May 5 and increase the number of buses with Tayo and his friends from four to 100.

“We have heard a lot of requests to increase the number,” an official from the transportation division of the Seoul Metropolitan Government said, “because sometimes parents and their children spend a lot of time trying to get [to the areas] where those buses come and go. So we decided to expand the Tayo buses to reach different neighborhoods.”

He added that other regional governments had also asked if they could operate the same buses, though intellectual property rights issues prohibited the project’s expansion.

“Tayo the Little Bus,” an animated series presented by Iconix Entertainment, follows the adventures of Tayo, a little blue bus, and his band of friends.

Seoul Mayor Park Won-soon added on his Twitter account that the city was also considering introducing a subway train designed after “Larva,” an immensely popular cartoon show for kids that features a pair of red and yellow slugs.

“The city is also working on doing something for ‘Pororo the Little Penguin,’” he said.

The Tayo buses - Nos. 370, 2016, 2211 and 9401- operate in the same way as regular city buses, stopping at each station. Parents and children can use the Daum map to check run times and the real-time locations of each vehicle.

The Seoul Metropolitan Government said more than 400 people hopped on those buses every day - a significant increase compared to previous periods. It also noted that it plans to add various features, including destination announcements using the voices of Tayo characters.

Seoul said that it costs about 3 million won ($2,840) to paint each vehicle. Mayor Park said the idea for the Tayo buses came from a request via his Twitter account last year from a Seoul resident and mother.

For more information, visit www.facebook.com/tayotayobus or the Daum map service.