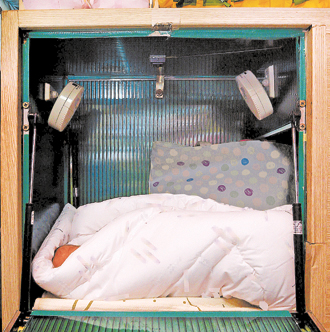 A 2-day-old baby was put in the baby box last Wednesday at Jusarang Community Church. When a person opens the box, sensors attached to it ring a bell inside the church to alert missionaries. The infant’s parents visited the church again the next day and took the baby home, saying they had changed their minds. By Kang Jung-hyun

On a chilly March night, a young mother holding her 20-day-old infant in her arms approached the Jusarang Community Church in Gwanak District, southern Seoul.

She pulled a knob attached to the church’s wall, which revealed a box fitted with an alarm that opened on either side.

She hesitated for a while, then placed her child in the compartment and turned around to leave.

Hearing the buzzer, Lee Jong-lak, 60, the church’s pastor, still in his nightclothes, hurriedly rushed outside, where he persuaded the 25-year-old woman to come inside and talk.

“Her father is my ex-boyfriend, and we don’t correspond with each other now,” the young mother said, sobbing. “I couldn’t tell my parents about the baby, and I can’t afford to raise her on my own.”

Since 2009, the church, which has become widely known in recent years as Baby Box Korea, had taken in 438 babies as of April 5. The baby box provides single mothers and parents who are unable to raise their children with a safe and anonymous alternative in a society that affords them few options. The system has already been employed in 19 countries worldwide, including Germany, the Czech Republic, Poland and Japan.

The 20-day-old infant was the 421st child left at the church. She was promptly taken to a nine-square-meter (96-square-foot) nursery, where she was photographed and her information was recorded. Police officers arrived the next day to collect DNA samples so that she might one day be able to locate her birth parents.

Two days later, the infant was taken to a children’s hospital for a medical examination, after which she was sent to a child care institution.

Lee and his wife record the babies’ information while they are in their custody, usually over two or three days. There were many reasons new parents abandoned their infants, they said. Economic difficulties, illegal residency and crimes committed by one or both parents tended to be the most common.

Out of the total 438 babies, in only 323 cases were the reasons for abandonment specified. In those instances, 173 babies - or more than half - were left in the box because they were born out of wedlock.

When the special reporting team visited from March 11 to March 15, the church received four babies, including the 20-day-old infant. One man, in his 40s, said he had no choice because the baby had been born between his wife and another man.

Another baby, just 2 days old, was left in the box along with a note with his birthdate and a paper with his footprints. A third baby was left by a high school student with a letter explaining why the teenager couldn’t raise the child.

Pastor Lee said most parents travelled from outside of Seoul to leave their infants at the church, with just 20 percent of abandoned babies coming from inside the capital city.

He added that one 21-year-old mother came all the way from Jindo County, South Jeolla, in the southwestern tip of the country. She told him that her parents were both in their 70s and couldn’t afford to help her raise a child.

Some people, he continued, have even called the church begging for KTX fare to make the trip up.

But there are a few happy endings. Parents sometimes return to take their children back, though such situations are rare. The family of the 2-day-old infant paid a visit to the church the day after they left him there, but so far only a few dozen out of the 438 babies given to the church have been fortunate enough to be reunited with their parents.

News of the baby box spread quickly since its start, with the number of children left at the church rapidly increasing from 35 in 2011 to 252 last year. The service, the only one of its kind in the country, has contributed to the increasing number of children at orphanages, though that number has decreased nationally each year, according to official statistics.

But while authorities’ efforts have so far focused on setting up barriers to prevent child abandonment, little has been done to ensure those babies are brought up in stable foster environments.

One 25-year-old unwed mother, identified only as Oh, for instance, said she became pregnant as the result of sexual assault. She considered putting her child up for adoption, but changed her mind when she realized she would have to document her information on the birth certificate.

The Act on Special Cases Concerning Adoption, which was partially revised in 2012, stipulates that before a child is put up for adoption, the baby must be registered.

“The regulation was revised so that the baby’s birth record must be registered first before adoption, so I gave up on adoption and came for the baby box,” Oh said.

Lee acknowledged that more and more unmarried mothers and fathers had left their infants in the box after the regulation was revised, wanting anonymity.

“What is this regulation for? I thought adoption would be best for my baby, but I gave up because I needed to report the birth of my baby first,” one unwed mother wrote in a letter last year after leaving her infant in the baby box.

The situation has currently left authorities, including the Ministry of Health and Welfare and the Seoul Metropolitan Government, at a crossroads.

“Abandoning children is clearly a crime,” said Kim Dae-yeol, the president of Holt Children’s Services of Korea, “but the baby box is making it possible for the babies to be raised in safe conditions. I’d say the baby box is shedding light on an uncomfortable truth in our society.”