A fellowship of rivals

A fellowship of rivals 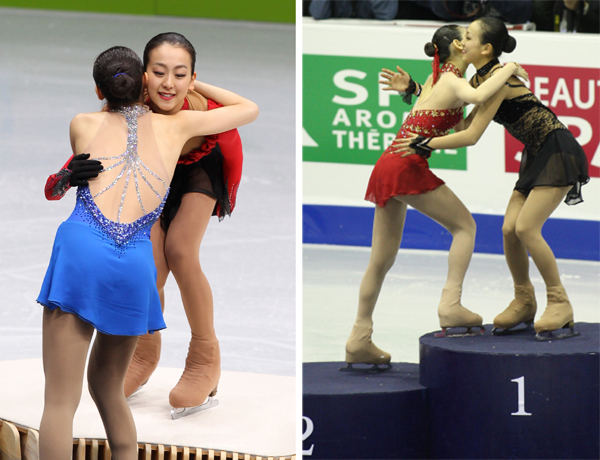 Left: Gold medalist Kim Yu-na hugs silver medalist Mao Asada at the awards ceremony for women’s figure skating at the Pacific Coliseum during the 2010 Vancouver Winter Olympics. Right: Kim, who took second place at the 2008 Grand Prix of Figure Skating Final in Korea, congratulates Asada for being the winner of the event. [Ilgan Sports]

Kim Yu-na won a silver medal at the Sochi Winter Olympics after some controversial scoring by the judges. When asked about the scandal, she said, “I think the gold medal went to someone who was more desperate for it.” The Vancouver Olympics gold medalist, who had endured four years of training for a chance at a second gold medal, remained amazingly poignant and mature. Her attitude was full of dignity and grace.

Not just figure skating fans, but all Koreans have been inspired and moved by Kim’s performances. She was simply breathtaking when she performed “Danse Macabre” and “Scheherazade,” skating on ice like a butterfly. The 23-year-old athlete has become a familiar name to all Koreans, a daughter, niece and sister to all of us.

Mao Asada of Japan was a rival for 10 years, and she skated through heaven and hell in Sochi. She fell during her short program and was in 16th place, but she finished in sixth after one of the best performances of her career in the long program. “Kim Yu-na is an amazing skater,” said Asada. “She is one of the fond memories in my career as a skater.”

Kim said, “I wouldn’t have been able to accomplish so much if Asada had not been competing.”

Just as Kim’s family, especially her mother, provided a great deal of support for Kim, Asada’s mother was an essential part of her career. While Asada was busy practicing her triple axel jump, her mother was diagnosed with liver cancer. Asada wished to become a donor for her mother’s transplant, but her mother refused and died at age 48. The death of her mother must have been a painful memory for Asada.

Kim and Asada were both born in September 1990. They were rivals and companions at the same time. While they were considered iconic figures in the contest of pride between Korea and Japan, their rivalry is over. So I would like to propose that they perform hand in hand in a gala shows all over Korea and Japan. Their fantastic jumps and spins would only benefit the relationship between the two countries.

Countless Koreans volunteered to help the rescue operation when an earthquake hit eastern Japan. The former comfort women temporarily discontinued their Wednesday protest and expressed their condolences for the victims of the devastating natural disaster.

In Japan, conscientious intellectuals condemn the distorted historical perspectives of some extreme rightists, and courageous citizens blocked the path of anti-Korea protesters. Many Japanese attended the memorial service for An Jung-geun and showed their respect.

It would be a beautiful thing if Kim and Asada become the icons of the spirit of friendship.

The two heads of states met in The Hague last month, but they couldn’t break through the barrier. The Abe government has had three falls involving the issues of Dokdo, comfort women and history education, and they are not stopping their backward-thinking provocations.

The future generation must be different. Together, Korea and Japan need to break out of the tragic fetters of the past and write a new history of reconciliation and cooperation.

Just as Asada made a comeback in the free program after a disappointing short program, we hope Japan will repent for the injustices of colonial rule and become a faithful partner in the history of human civilization. Also, Korea cannot manage the North if we have a nuisance in the South. We need a friendly relationship to make sure Japan doesn’t stand as an obstacle in the grand path to reunification. If Kim Yu-na and Mao Asada can turn their parallel rivalry into a long-term partnership, it should be possible for the ice-old Korea-Japan relationship to melt away with a double jump.