Monopolies on imports of goods are challenged

Monopolies on imports of goods are challenged 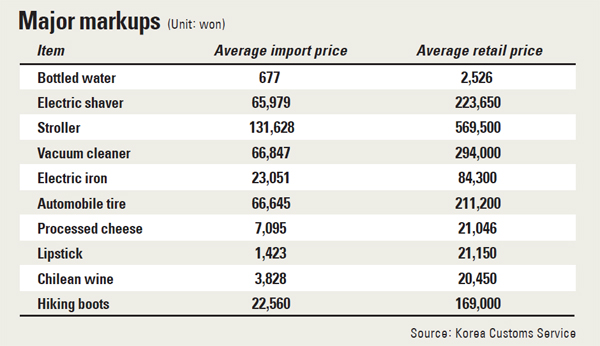 In order to reduce rip-off prices on imported goods, the government yesterday said it would allow more independent importers to pry open some monopolies.

The Ministry of Strategy and Finance, the Korea Customs Service and the Fair Trade Commission jointly announced that the number of independent, or “gray” or “parallel,” importers allowed to bring in foreign brands with customs certifications will be boosted from 122 to 230.

The types of goods that can be independently imported will be increased from six to all commercial goods excluding some food and pharmaceutical products.

A rapidly increasing number of Koreans are making purchases on foreign websites directly from foreign manufacturers at much cheaper prices. Tech-savvy consumers in particular prefer overseas online shopping to buying the same products in Korea for an arm and a leg.

Major products imported to Korea sell for 2.7 to 14.9 times higher than their import prices, according to data compiled by the Korea Customs Service between December 2013 and February 2014.

Look no further than lipsticks.

Korea imports lipsticks mostly from France and the United States.

The government aims to lower prices of imported goods by 10 percent to 20 percent from current levels.

“The current import market is monopolized by a few large importers, and prices have been distorted,” said Hyun Oh-seok, deputy prime minster for the economy and finance minister, at an economic ministerial meeting yesterday. “By bolstering operations of independent importers, the government will promote competition and reduce consumer costs.”

The point of the measures is to diversify import channels by removing procedural hindrances.

The Korea Customs Service legalized operations of independent importers in 1995. But consumers have remained suspicious of the quality of products that were independently imported until recently.

The Korea Customs Service currently puts QR codes that carry customs information on imported goods that have legally passed clearance. This is a certification system for independent importers to help them gain consumer trust. The QR code system has been resisted because it requires too much from importers.

At present, 236 brands of mostly clothes and shoes fall under the government system. The government plans to expand the number of brands to 350.

At the moment, 122 companies are benefiting from the system, but that number will increase to 230 next year, the government forecasts.

From July, the government reporting system will be simplified for goods that are directly bought on foreign websites.

For the last four years, the volume of such purchases quadrupled from $250 million to $1 billion.

The government will simplify customs procedures for all consumer goods costing less than $100.

Under the simplified system, the average customs period will be shortened from three days to half a day. Delivery companies will not be required to report to licensed customs agents, but they will have to submit documents with 23 kinds of information.

Due to the free trade agreement between Korea and the United States, the ceiling for American goods will be $200.

The government will also devise measures to protect consumers who want to return products bought on foreign websites. The Korea Consumer Agency will set up a call center with guidelines for overseas purchases.

Portals that run blogs or Internet communities set up for overseas purchases will be held accountable if consumers get cheated.