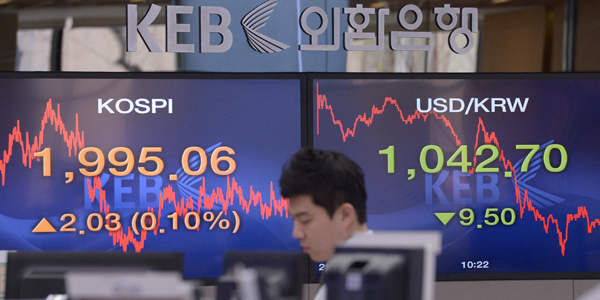 A currency board at Korea Exchange Bank headquarters in Myeong-dong, central Seoul, shows the Korean won appreciating against the dollar to the strongest level in nearly six years yesterday. The won closed at 1,041.4 yesterday, breaking the psychological barrier of 1,050 per dollar. [NEWSIS]

The Korean won has appreciated to pre-financial crisis levels for the first time in nearly six years.

The 1,050 won mark has been a significant psychological barrier. Many major exporters like Samsung Electronics and Hyundai Motor have acted to mitigate foreign exchange volatility through various means, including increasing the production of overseas plants.

The weakening of the yen since late 2012 has also raised awareness of foreign exchange rates on competitiveness in the global market. However, many small exporters remain vulnerable to a sudden appreciation of the local currency against the greenback.

Many exporters consider 1,050 won to be their break-even point, and if the won enters the 1,040 range the companies’ profit is affected. 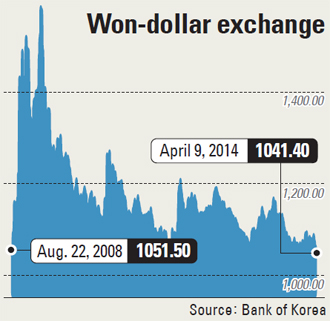 Still, the sudden appreciation of the won did have an effect on leading conglomerates in the stock market, as Samsung Electronics, Hyundai Motor and Kia Motors saw their shares retreat.

Experts say the recent appreciation of the currency was the result of continuing net buying by foreign investors since late last month.

“The 1,050 won-dollar exchange has been a strong barrier since 2011,” said Oh Seung-hwan, an analyst at Daishin Securities. “But [lately] foreign investors have turned from net sellers to net buyers of Korean stocks, while the current-account balance continues to post a surplus and global investor preference for riskier investments has gotten stronger. Once the won appreciates below 1,050 won, the rate at which it will become stronger will accelerate.”

Since March 26, foreign buyers have bought Korean stocks amounting to more than 2.5 trillion won. Most purchases were concentrated on the blue chips: Samsung Electronics, followed by Kia Motors and LG Electronics.

Recently, with the global market in recovery, investors have become more daring as they have increased their investments in emerging markets like Korea and India.

The government did not intervene in the market yesterday to prevent the won from appreciating beyond 1,050.

In recent years, particularly since 2011, the government jumped in when the won approached 1,050 won or issued sharp warnings.

Earlier in the day during a meeting, Finance Minister Hyun Oh-seok reportedly said he was more interested in the volatility of the currency market than on where the won-dollar exchange rate stood.

The steel, metal, electricity, gas, chemicals, and food and beverage sectors are expected to benefit from the appreciation of the won.