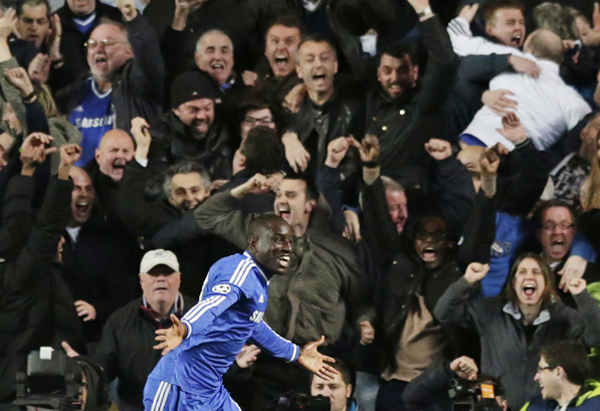 Growing up, Demba Ba dreamed about scoring big goals for Paris Saint-Germain. With the team he supported as a child on the verge of reaching the Champions League semifinals for the first time in 19 years, Ba instead scored the goal that knocked them out.

Now it is Chelsea joining European football’s final four for the seventh time in 11 years.

Ba seemed the most improbable player to complete Chelsea’s comeback, having been largely overlooked by Jose Mourinho for much of this season, but he delivered from the bench when it mattered most for the 2012 European champions.

Ba’s sixth goal of the season in the 87th minute, after Andre Schurrle’s first-half opener, clinched a 2-0 victory that overturned a 3-1 loss from the first leg and sent Chelsea through on away goals.

“It happened so quickly,’’ Ba said. “I was on the floor, just looked at the goal, and I saw the ball was in the net. It was a big joy for everyone. I just do what I have to do when I get chances. I haven’t had many this season.’’

Mourinho was elated, sprinting from the bench to join his celebrating players, who collapsed in a heap on the pitch.

“It was not to celebrate - it was to tell the players how we have to play,’’ Mourinho said. “But you could see that I can still run.’’

And Mourinho is still a winner - a decade after the Portuguese’s memorable dash down the Old Trafford touchline in a game against Manchester United during his Porto side’s run to the Champions League title.

Now Mourinho, having failed to bring the European Cup to Chelsea during his 2004-7 stint in charge, remains on course to win the competition in his first season back at Stamford Bridge, while the team is also second in the Premier League.

Joining Chelsea in draw on Friday is Real Madrid, which lost 2-0 at Borussia Dortmund but still went through 3-2 on aggregate. On Wednesday, Bayern Munich hosts Manchester United and Barcelona takes on Atletico Madrid after both first legs ended 1-1.

For PSG’s Qatari owners, it’s another season of heartbreak in Europe - a victim of the away-goals rule in the quarterfinals just as the team was against Barcelona last year.

This was a night when PSG needed Zlatan Ibrahimovic, but he was injured in the first leg.

In a lively start, a menacing cross from Maxwell was sent to the feet of Cavani, but Petr Cech saved at the striker’s feet.

What seemed to be an early setback for Chelsea proved fortuitous, with Schurrle replacing the injured Eden Hazard after just 18 minutes and scoring in the 32nd.

Branislav Ivanovic launched the ball in from the right, and it was flicked on by David Luiz. Left completely unmarked, Schurrle had the time and space to calmly dispatch the ball into the net.

Until that point, goalkeeper Salvatore Sirigu had only had two serious saves to make, from Frank Lampard’s free kick and Luiz’s long-range strike.

But, even though Chelsea’s play was far from incisive or flowing, now the hosts had hope.

The crossbar thwarted them twice within two minutes at the start of the second half: first from Schurrle’s curling shot and then from Oscar’s free kick.

Mourinho beefed up the strike force in the 66th, bringing Ba on to support the ineffective Samuel Eto’o up front.