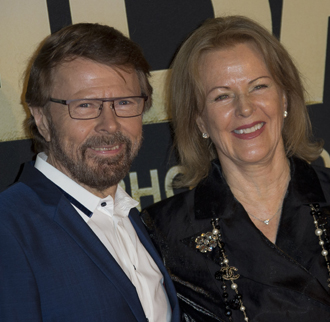 Swedish singers Bjorn Ulvaeus, left, and Anni-Frid Lyngstad, of the pop group ABBA, pose on the red carpet on Monday ahead of the band’s International anniversary party at the Tate Modern in central London. The event marks the launch of “ABBA: The Official Photo Book,” the first-ever authorized photographic biography of the band. [AP/NEWSIS]

LONDON - Within strolling distance of the rail station bearing the name of their first international hit, Swedish band ABBA celebrated 40 years of breathtaking success with a party at London’s Tate Modern museum to mark their groundbreaking song “Waterloo.”

Two of the four members of the band that made spangled jumpsuits and big boots a trademark attended the bash at the trendy London museum on Monday night, marking four decades since the catchy tune won the Eurovision song contest in April 1974 and launched them into international stardom.

Bjorn Ulvaeus, who wrote many of the group’s songs with ABBA co-founder Benny Andersson, said he was stunned by the rise and rise of ABBA even after it effectively disbanded in 1983.

The band not only lives on through its disco-friendly back catalogue, but also in the long-running hit show “Mamma Mia,” the film based on the musical, and in the latest offering, a new “ABBA: The Official Photo Book” launched last month.

“It happened over quite a long period of time,” Ulvaeus said at the London event, noting that success had not come easily.

“I mean, we didn’t have a hit after hit after hit. We had a hit and then we wrote another song, recorded it, released it and it was like that. It seems today like it was all happening at the same time, but it wasn’t.”

He was joined at the party by Anni-Frid “Frida” Lyngstad, one of the band’s two lead singers, who attributed ABBA’s success to the right people getting together at the right time.

“We knew a bit about the business, and the mix of the talents was probably a wonderful thing, and also being couples, being together and exploring that world,” she said. “It was a new kind of thing for all of us.”

Partygoers sang “Happy Birthday” to the two band members, to which Lyngstad responded:

“We really feel privileged, you have to know that. We feel privileged to be able to survive for 40 years and to stand here today and celebrate it with you. It’s pure happiness. Thank you so much.”

The evening included a disco of ABBA songs, with various cardboard cut-outs of ABBA members for fans to pose with.

The food served consisted mostly of hotdogs and beer, a tradition among ABBA fans, and the evening ended with a group called the ABBA Choir singing some of the group’s greatest hits - including “Waterloo.”