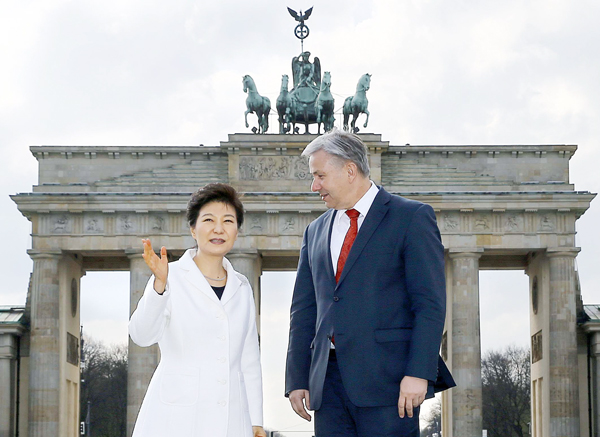 President Park Geun-hye is welcomed by Berlin Mayor Klaus Wowereit in front of the Brandenburg Gate in Berlin during her state visit to Germany last month. [REUTERS/NEWS1]

Twenty-five years ago, Chancellor Helmut Kohl of West Germany spoke in Dresden to address two German questions. It was 40 days after the fall of the Berlin Wall in 1989. The first question was that of reunification, and Kohl sent a reserved message to his East German audience. Instead of fanning nationalism, he said he hoped that East Germany would be absorbed into West Germany. When the Iron Curtain crumbled, East and West Germany sought cooperation first and a unified nation or a federation later. Kohl mentioned reunification only once and with reservations. Instead, he emphasized peace, liberty and self-determination; in the end, reunification was in the hands of the East Germans, he said. The internal issues of the German problem were resolved through a free election.

The other question he spoke to was the foreign implications of reunification, and he clearly wanted to assuage its neighbors’ fears. A strong Germany brought nightmares to Europe twice in that century, but in the middle of Europe, a divided Germany was also a flashpoint at the crossroads of the Cold War.

Kohl said, “The house of Germany, our house, must be built under a European roof.” The future of a unified Germany was within the boundary of an integrated Europe. Germany became the engine of the European Union.

German reunification was a process of addressing those two German questions. The moment of rejoicing was a product of the consistent domestic and foreign policies of West Germany. Progressive and conservative administrations had different domestic policies, but they shared a belief in humanitarian assistance, exchanges and cooperation. The focus was on the people of East Germany. During the transition in 1989-90, Kohl’s diplomacy was essentially a journey back to the days before the division, with a new start. The East Germans tore down the Berlin Wall, but the Kohl administration removed it permanently.

The biggest challenge was to relieve security fears. France is traditionally antagonistic toward Germany. The United Kingdom had made a balance of power in Europe the basis of its foreign policy for 400 years. The Soviet Union feared revanchism in Germany - the “Fourth Reich.” Kohl’s vision was for unifying Europe, remaining in NATO, tentatively applying restrictive treaties on East Germany and downsizing German military capacity to 370,000 troops. The unification diplomacy was as dramatic as the fall of the Berlin Wall.

Turn the globe to the Korean Peninsula. The Cold War has become a heated confrontation. The walls of division are high, and the valley of ruptures is deep. Since 2000, limited exchanges and cooperation between South and North Korea have nearly ended. Heterogeneity rules over homogeneity. In Germany, two-thirds of East Germans had contacts with West Germany before reunification, but North Korea is no East Germany. Its human rights conditions are far more appalling; its market has only begun to function. Its nuclear weapons and ballistic missiles are a black hole for international intervention. The inter-Korean relationship is distorted. It is hard to predict whether the Kim Jong-un regime will be stable.

The external environment is not much different. German reunification coincided with the end of the Cold War and a Pax Americana. In Northeast Asia, the United States and Japan confront China. Things are moving in the opposite direction of that a half-century ago. Neighboring countries may be concerned about changes in power dynamics that Korea’s unification would bring and are carefully observing the development of Park Geun-hye’s “reunification jackpot” theory.

That theory is a breakthrough in North Korean policy. It is an approach to unification, rather than mere reconciliation and cooperation. There is much speculation about North Korea as a new frontier. While North Korea has raised its guard, things may be changing. Park Geun-hye’s Dresden address was a message to Pyongyang. The core is humanitarian assistance, livelihood of the people and a recovery of homogeneity. It is not as grand as the theory Dresden symbolizes, but we need to use the opportunity to refine our vision for a unified Korea. Only then can we clear away the worries and questions of our neighbors.

The vision of a unified Germany was that of a bridge between Eastern and Western Europe, anchored on Western alliance. The precedent has a lot to tell us. The German question and Korean question are different, but still the same.