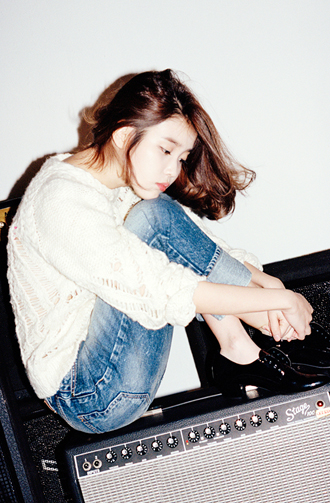 Singer IU will release a tribute album for the first time in May, in which she will cover classic pop songs in her own style. She is also slated to hold a small concert after the album’s release.

“We are planning on coming up with a new style of performance in a small-scale space, just focusing on how to deliver good music,” said an official from her agency, Loen Entertainment.

The 20-year-old singer, whose real name is Lee Ji-eun, has never before released an official album reworking hits from the past, although her past albums, particularly her third official release “Modern Times” - which became an instant hit with its lead track “The Red Shoes” - achieved great commercial success.

IU earlier confirmed that she will make an appearance at the tribute concert for the late legendary folk singer Kim Kwang-seok on April 19, which is expected to be attended by many talented vocalists, including Yoon Do-hyun, Kim Tae-woo and Ulala Session.

IU’s upcoming concert will include eight shows over two weeks from May 22 to June 1. Tickets are available through interpark.com from Thursday at 8 p.m.