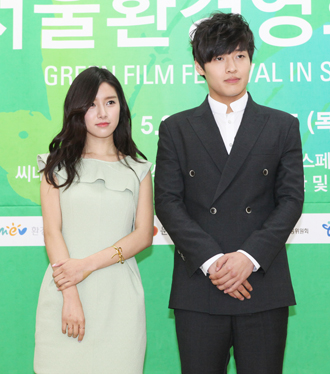 Actress Kim So-eun, left, and Kang Ha-neul pose at a press conference in Jeong-dong, central Seoul, on Tuesday. The two actors plan to serve as goodwill ambassadors for the 11th Green Film Festival in Seoul. Provided by the organizers

On Tuesday, the Korea Green Foundation revealed more details about the 11th Green Film Festival in Seoul at a press conference in Jeong-dong, central Seoul. The major theme of this year’s film festival is familiarity.

“In order to communicate well with the general public, we’ve decided to hold the festival all across the Gwanghwamun area so that people can find the venues more easily,” said film critic Oh Dong-jin, the vice chair of the festival’s committee.

This year, the committee is determined to counter the popular belief that environmental films are rather boring by adding variety to the festival. “Instead of being too serious in addressing environmental issues, we are going to feature interesting and dramatic films,” Oh said.

Jordan Vogt-Roberts’s 2013 film “King of Summer” will kick off the festival’s opening night. The director also plans to talk to the audience about his film.

The festival is not only focusing on reaching a wider public. In fact, the 11th annual festival is reinforcing its mission of showcasing environmental films from around the world.

As many Asian countries have experienced a rapid rate of industrialization over the past several decades, Thai director Nontawat Numbenchapol explores how contaminated water destroys a local community in the documentary film “By the River.”

Finnish director Anna-Karin Gronroos, on the other hand, describes the struggle to pursue eco-friendly development in contemporary Chinese cities in her 56-minute documentary.

“Eight years have passed since we first encountered ‘An Inconvenient Truth,’” said Kim Young-woo, who contributed to the programming of this year’s festival. “But as time has passed, some people find the Al Gore-kind of message a little didactic. Through the 11th Green Film Festival, we hope to reach as many people as possible by featuring both light and serious stories.”

At the end of the press conference, actor Kang Ha-neul and Kim So-eun were appointed Eco-friends, or goodwill ambassadors of the festival.

“I’m truly honored to represent such an important event,” beamed Kang in front of the media.

The Green Film Festival opens on May 8 at Gwanghwamun, central Seoul. Throughout the seven-day festival, about 110 films will be shown in three different theaters, including Cine Cube and Indie Space. Outdoor screenings will be held at the Seoul Museum of History.