Rock and Roll Hall of Fame has history of animus

Rock and Roll Hall of Fame has history of animus 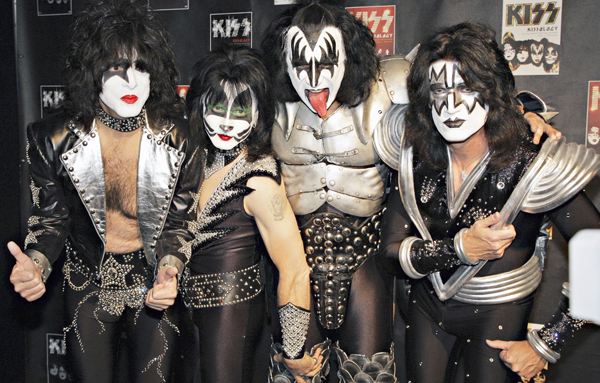 This May 8, 2008, file photo shows members of Kiss, from left, Paul Stanley, Eric Singer, Gene Simmons and Tommy Thayer in Oberhausen, Germany. This year, Kiss is angry with the Rock and Roll Hall of Fame. Its members are upset over the organization’s decision only to induct original members Paul Stanley, Gene Simmons, Peter Criss and Ace Frehley while excluding members who joined later. As a result, the makeup-wearing rockers won’t be at the ceremony on Thursday at the Barclays Center in Brooklyn, New York. [AP/NEWSIS]

Graciousness is not always high on the list of attributes you find in successful rock ‘n’ roll stars. Because of this, Rock and Roll Hall of Fame inductions have sometimes brought out the worst in its inductees, whether continuing once-private feuds in public or launching criticism at the hall itself.

As a result, the makeup-wearing rockers won’t be wearing makeup or rocking at Thursday’s ceremony at the Barclays Center in Brooklyn when they’re inducted with Nirvana, Peter Gabriel, Linda Ronstadt, Hall and Oates, Cat Stevens, The E Street Band, the late Beatles manager Brian Epstein and former Rolling Stones manager Andrew Loog Oldham, who also is boycotting this year’s show over dissatisfaction with his role.

Here’s a quick look at seven other acts who chose to make the ceremony uncomfortable for everyone or just skipped it altogether:

• The guys in Guns N’ Roses are at a point now where they can sometimes play nice together, but that was not the case when the Los Angeles rockers were inducted in 2012. Frontman Axl Rose decided to skip the ceremony because it didn’t “appear to be somewhere I’m actually wanted or respected.” Guitarist Slash, bassist Duff McKagan and drummer Steve Adler, however, did take the stage, performing together for the first time in nearly two decades. Myles Kennedy served as the stand-in for Rose.

• There was nary a Van Halen during the towering rock band’s induction. Guitarist Eddie Van Halen chose to enter rehab the week before the 2007 ceremony - a pretty rock-solid excuse. But his drummer brother Alex also chose not to attend. And original lead singer David Lee Roth pulled a very Roth-like maneuver and pulled out at the last minute in a huff over what song he’d perform at the event. That left bassist Michael Anthony and second singer Sammy Hagar as the only official attendees. They were reduced to performing with Paul Shaffer’s house band.

• John Fogerty also faced the prospects of a put-together band when he refused to play with surviving Creedence Clearwater Revival members, bassist Stu Cook and drummer Doug Clifford. He rallied with a couple of all-stars - Bruce Springsteen and The Band’s Robbie Robertson - to back him onstage, but the rift became oh-so-public when Cook and Clifford left the room while Fogerty played. The band split in 1972 and Fogerty was still holding grudges at the 1993 induction, telling Cook and Clifford he wouldn’t play with them ever again when they showed up for rehearsal earlier in the day. Cook and Clifford returned when the lights came back up, with a forlorn Cook holding the bass he’d hoped to play.

• The Sex Pistols were among the first and most notorious punk rock bands and fittingly extended a metaphorical middle finger to the hall when finally inducted in 2006 - five years after it was first eligible. The British band, which featured lead singer Johnny Rotten and late bassist Sid Vicious, said in a handwritten and ungrammatical note posted on its website that the hall was like “urine in wine” selling “old famous”: “Were not coming. Were not your monkeys and so what?” Rolling Stone magazine founder Jann Wenner read the letter in its entirety and invited the band to pick up their trophies anyway: “If they want to smash them into bits, they can do that, too.”

• The middle finger was not metaphorical at all when Elvis Costello briefly appeared on stage as his backing band The Attractions during the same 2007 ceremony. The British singer had been touring with two members of the band, but was in a long-running feud with bassist Bruce Thomas. Thomas took his trophy from a presenter, said, “Thanks for the memories, that’s it,” and then walked off the stage and out the door. Costello marked his exit with his middle finger.

• Members of Blondie added even more bad blood to the 2007 ceremony as a division between founding members Debbie Harry and Chris Stein, and Frank Infante and Nigel Harrison spilled onto the stage. Harry and Stein had begun performing together in 1999 without the band’s other three members and Infante and Harrison sued unsuccessfully to rejoin the band. Infante continued to lobby Harry onstage at the ceremony: “Debbie, are we allowed?” She declined and the band went on to play its three biggest hits with stand-ins. “They wrote themselves out of the band history, as far as I’m concerned,” Stein said backstage. “They should have a little bit of honor. This is supposed to be rock ‘n’ roll. This is supposed to be friendly.”

• Paul McCartney and Ringo Starr recently reunited to celebrate the 50th anniversary of the Beatles’ first trip to the United States. But things weren’t always so copacetic, as McCartney showed when he failed to show up to the group’s induction in 1988. He explained the decision through a publicist: “After 20 years, the Beatles still have some business differences. I would feel like a complete hypocrite waving and smiling with them at a fake reunion.”