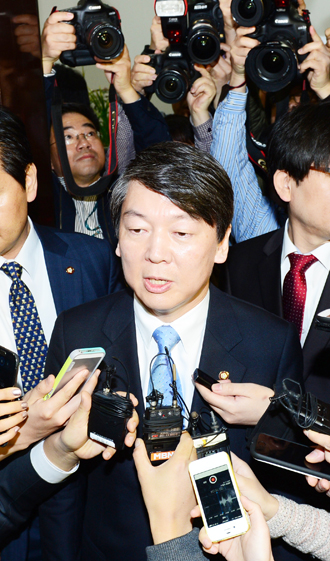 Ahn Cheol-soo, co-chairman of the New Politics Alliance for Democracy, talks to reporters yesterday as he walks out of a closed-door Supreme Council meeting in the National Assembly. The NPAD decided to retract its pledge of abolishing party nominations for local elections in accordance with the result of a poll of party members and the general public on the issue.[NEWS1]

Bowing to political realities and growing anxieties inside the party, the opposition New Politics Alliance for Democracy followed the ruling Saenuri’s lead in reneging on its 2012 campaign promise to eliminate party nominations for lower-level positions in the upcoming local elections.

“Respecting the wishes of the people and party members, the New Politics Alliance for Democracy will field candidates for the local elections,” said former tycoon and failed 2012 presidential candidate Ahn Cheol-soo before a throng of reporters at the National Assembly yesterday, with his party’s co-leader, Kim Han-gill, sitting next to him.

For breaking the long-touted promise to discard party nominations, which he always described as a major political reform for Korea, the somber-looking Ahn tendered an apology, “Regardless of how we got to this point, I apologize that we have to break the promise.”

The NPAD’s decision to walk away from the no-nomination pledge came a day after it conducted a poll of its party members and the general public, asking whether the party should break the promise to better its chances in the June 4 local elections.

In the survey conducted Wednesday of 89,826 party members and 2,000 members of the general public, 53.44 percent of those polled were in favor of the party breaking its pledge and nominating candidates for city, district and county councils, the lowest levels of elected office. The outcome had a 50-50 weighting for party members and the public.

The question in the phone survey was: “For the upcoming local elections, both candidates from the ruling and opposition pledged in the 2012 presidential campaign that they would end party nominations for local elections. But the Saenuri is now going ahead with the nominations. Within the NPAD, there are opinions that the election will be an unfair race if it does not field candidates after the Saenuri makes its nominations. There are also contrary opinions that say the party should stick to its pledge, even with the Saenuri breaking its own. Which opinion do you support?”

The retreat by the opposition came after more than a month of bashing the Park Geun-hye government and the ruling Saenuri Party for breaking its promise not to field candidates.

Ahn then called for the poll to be taken.

During the 2012 presidential election, both the Saenuri and the Democratic Party promised they would stop nominating candidates for city, district and county council. (In March, the DP merged with Ahn’s supporters to create the New Politics Alliance for Democracy, or NPAD.) The idea was to remove party politics from elections at the grass-roots level and end certain corrupt practices.

The Saenuri Party, however, went back on its promise in February, fearing that party-less elections would be a mess. If the national parties don’t control nominations, more than one candidate can run on the conservative or liberal side, splitting the vote. And in a polarized political environment like Korea’s, voters are used to choosing based on the ideology, and therefore the party, of the candidate.

The reversal by the NPAD may deal a blow to the leadership of the country’s second-largest political body, which commands the loyalty of 130 lawmakers, and Ahn in particular.

Consensus reached by supporters of Ahn and the Democrats last month on making good on the no-nomination promise was what enabled the two groups to form the NPAD through the March merger.

“The new party will uphold a promise to get rid of party nominations for lower-level administrative posts and pursue political reforms to fix persistent malpractices in the political establishment,” said Ahn on March 2 when announcing the merger.

Since he began his political career in September 2012, when he declared his ultimately failed bid for the presidency, Ahn has branded himself as a new type of politician who can bring about positive change in politics, which accounts for his popularity. The former software mogul told the public he would always honor promises made to the people, unlike the cynical politicians of the past and present, and strive to overthrow vested interests in the political establishment.

“This is a clear setback for Ahn,” said Yoon Hee-woong, a director of the public opinion analysis team at Min Consulting, a political consulting group. “No-party nominations was a prime example cited by him of his ‘new politics.’?” The veteran political consultant said Ahn has “recognized his limits as a politician” with his political “stature being damaged.”