Transition to adulthood trying for the orphaned

Transition to adulthood trying for the orphaned 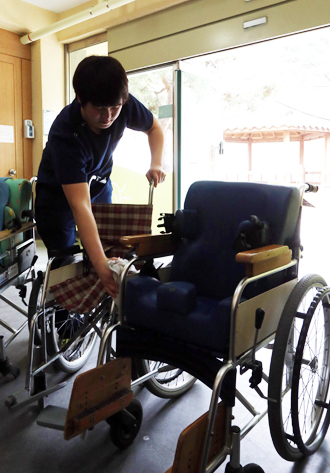 Jang Seong-won, 31, folds wheelchairs on March 25 at a social welfare center. He lived in an orphanage from the time he was 3 until adulthood. After landing a part-time job at a local mall, he was able to pay off his debts. Jang is currently employed as a social welfare worker. By Kang Jung-hyun

Jang Seong-won was just 3 years old in 1986 when he was abandoned in a subway station in Seoul. He couldn’t remember his address or his parents’ names, and was subsequently sent to an orphanage in Geumcheon District, western Seoul, where he lived over the next 15 years.

He graduated from high school and entered a university in Anyang, Gyeonggi, but his troubles really began in 2001, after he turned 19, when he was no longer allowed to stay at the orphanage.

He was given a few million won as a settlement to get on his feet and was fortunate enough to be admitted into the Don Bosco Independent Center, a Catholic institution that aids poor youths, where he could stay for free.

But having no income, he soon ran out of money.

“An acquaintance lured me into an investment plan, so I borrowed money,” he said, “but it turned out to be an illegal pyramid scheme selling health drinks.”

Despite the promises his friend made, Jang lost his money and fell 7 million won ($6,651) into debt. Complicating matters, he was required by regulation to vacate his room at the Independent Center after he turned 24.

So Jang moved into a gosiwon, an inexpensive type of housing primarily used by students preparing for exams, where he stayed for 300,000 won a month.

His small room had no natural light, which added to his frustration and misery, and he started to rely on alcohol to put him to sleep every night.

But things eventually began to look up, and Jang got a part-time job at a nearby mall. After a year, he was able to pay off his debt. Afterward, in 2007, he landed a job as a social welfare worker at a nursing home for the handicapped and elderly in Gyeonggi.

He is currently employed as a social worker at a welfare center for handicapped children.

Jang’s story is typical for those like him, who grew up alone in the care of the state. The amount of assistance local governments generally put aside for young people who graduate from orphanages tends to range from 1 million won to 5 million won. In some instances, however, local budgets are too tight to provide that aid.

Critics of the system have long argued that the authorities should provide more money to those who advance from orphanages into society. The amount, they say, is too small, particularly in comparison to the support afforded to North Korean defectors, who also require welfare.

Defectors are granted at least 7 million won in addition to another 13 million won for their residence.

Lee Sun-deok, the head of the Seoul Metropolitan Children’s Welfare Center, emphasized the need for the government to do more to help disadvantaged youths.

“The central government needs to support [orphans’] social settlement and help them establish an employment plan,” he said.

But in addition to financial difficulties, disadvantaged youths also have difficulty finding and holding down jobs and face discrimination later in life. Others have problems in their interpersonal relationships.

But many also end up on the street.

In November 2012, the body of a 39-year-old man who had allegedly died of hypothermia was found at Yeongdeungpo Station. According to authorities, he was reportedly an orphan who had graduated from state care two decades before. The man was formerly a factory worker, but he had trouble adapting to the environment and eventually lost his job.

In the same survey, about 90 percent of the respondents were working as part-time employees or daily laborers, and about 44 percent were earning less than 1 million won per month - which is less than the minimum wage of 1.08 million won for full-time workers.

When reporters from the JoongAng Ilbo interviewed seven people in their 20s and 30s last month who formerly lived in child care institutions, most acknowledged that social prejudice had been a major social barrier in their adult lives.

“I changed my job many times because I had trouble with co-workers who talked behind my back about the fact that I grew up as an orphan,” said one 40-year-old man, who now works at an auto parts factory in Anseong, Gyeonggi. “I often ate alone and I was treated as an outcast. I sometimes quit jobs in a fit of temper.”

Others who were interviewed also pointed to hardships in their marriages and relationships. “My in-laws rejected my marriage at first,” said one 34-year-old woman who wed five years ago. “I still feel anxious when I see them.”

“Women seem to believe men from orphanages are rough, so I usually hide my background,” he added. “When I tell them, they sometimes end the relationship.”