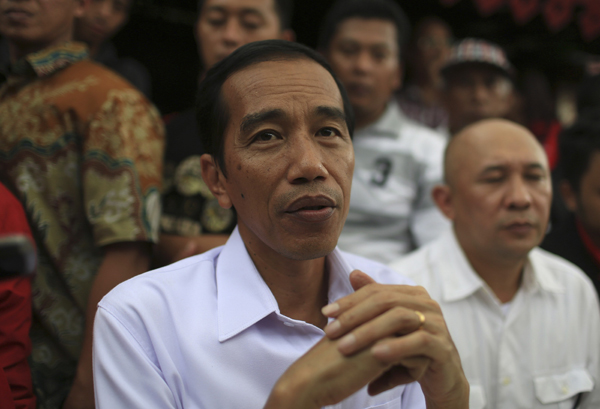 Jakarta governor and presidential candidate Joko Widodo looks on during a PDIP party campaign in Jakarta last month. Indonesians are coming to assume that the hugely popular Jakarta governor will be their next president. [REUTERS/NEWS1]

Crowds can’t get enough of the wiry, fresh-faced and charismatic political newbie. Young voters who’ve never cast a ballot before lurch forward to catch a glimpse of the outsider who embodies the new generation of leader they crave - smart, incorruptible and in touch with their aspirations for change.

This charged atmosphere will sound familiar to Americans who embraced Barack Obama in 2008. It’s playing out anew in Indonesia. The news media have been quick to dub presidential front-runner Joko Widodo, 52, the Indonesian Obama, and not just because the U.S. leader spent part of his childhood in the Southeast Asian nation. As Jakarta governor since October 2012, Widodo has carried out his duties like a community organizer, visiting slums unannounced, without huge entourages. He wades into floods, sits down with local shopkeepers and settles disputes with neighborhood leaders.

Widodo’s common-man persona is buttressed by his clean reputation. Indonesia is the world’s third-biggest democracy after India and the United States, but the country is really only 15 years into this one-person-one-vote thing. Prior to 1998, when strongman Suharto was ousted, the archipelago of 17,000 islands was a shameless kleptocracy. Outgoing President Susilo Bambang Yudhoyono has tried to root out graft since 2004, only to see his Democratic Party get ensnared by it. Hence the appeal of an outsider who can shake up the political system without fear or favor.

But this week, a funny thing happened on the way to Indonesia’s Obama moment: The voters Widodo is supposed to be electrifying didn’t show up in Wednesday’s parliamentary elections, which precede July’s presidential vote. A surprisingly poor showing by his Indonesian Democratic Party of Struggle has scrambled the electoral calculus once again. That’s bad news for Southeast Asia’s biggest economy.

If he’s to be the change Indonesians desire, Widodo needs a clear and strong mandate. Instead, his party appears to have won less than 20 percent of the votes. Because of Indonesian law, he may need to form alliances just to stand in July’s presidential election. Instead of a small government geared for reform, Widodo is looking at having to form a fragmented, multiparty coalition akin to India’s. Get ready for months of compromise, doling out ministerial posts to rivals and horse-trading galore.

Pundits argue Widodo’s party would have needed 35 percent to 40 percent of the vote to really shake up the political system. The way things are shaping up, it’s hard to see a President Widodo boldly attacking corruption, cutting red tape and efficiently carrying out the huge, multibillion-dollar infrastructure projects needed to keep pace with China and the Philippines.

What happened? Jakarta politics. For all the excitement about moving beyond the cronyism of the past, dangerous remnants of the system Suharto built over 32 years in power remain. Take Hanura, a party led by an ex-army general, which offered its supporters 5 million rupiah ($443) small-businesses loans and gave new members one year of free life insurance. Other parties doled out everything from medical checkups to seeds for farmers to freezers and prize drawings for trips to Saudi Arabia for the Hajj. It’s safe to assume lots of cash changed hands, too.

Indonesia doesn’t have a monopoly on ill-gotten votes, but old-school politics have complicated Widodo’s task. In addition, many of the 12 parties who contested the election created a circus-like environment by recruiting a bevy of beauty queens, models and Formula One race girls to run for office based on their looks, not ability. All this means that, at a minimum, Widodo will have to work much harder to translate his popularity into actual power.

Between now and July, Widodo must articulate a clearer, more forceful vision for how he intends to handle these challenges and others. He has yet to detail how he’ll end graft, raise Indonesia’s competitiveness, and beef up education and health care without exacerbating national debt. When he showed up at campaign stops in 2012, often on bicycle, all Widodo had to do was wave and smile. Now, he must offer specific and nuanced proposals.

Widodo is only going to face more resistance between now and July, not less. On Wednesday, he cast his vote just down the road from where Obama went to school in a colonial-era district of Jakarta. It’s perhaps the ultimate irony that Indonesia’s Obama may, too, get Obama-ed by political forces that aren’t as ready for change as the people are.